Despite the first three months of the year sat on my derriere doing sweet Fanny Adams, I actually felt like I’d earned a break, and was frothing with enthusiasm for our family half-term holiday to ‘Scarbados’ on the East Coast.

With a weather forecast to rival that of Mauritius, I excitedly donned seersucker tailored shorts, box-fresh white sneakers and polo shirt, and off we set towards endless blue sky, sparkling aquamarine ocean rollers, and the cry of gulls in our ears.

Ten minutes from North Bay we hit fog – otherwise known as ‘sea-fret’ – our lush, sun-drenched, verdant surroundings transformed into the gloomy moor in Sherlock Holmes’s “The Hound of the Baskervilles.”

After unpacking the car, we headed out for a stroll around Peasholm Park, my legs covered in goosebumps as they were enshrouded by the freezing mist.

Like a family of professional speed-walkers, we sprinted towards a bench that was miraculously aligned with a ray of sunshine that had broken through a chink in an otherwise impenetrable blanket of cloud.

Once our core body temperatures had risen above hypothermic levels, we shivered back to the apartment in search of jumpers, and decided a trip to the amusement arcades of South Bay, otherwise know as ‘Scarvegas’, was a solid option in line with the inclement weather.

As we tramped along the crowded seafront, I reminisced a scene from a trip with my wife to Positano on the Amalfi coast.

Heading out to dinner on a balmy evening, we ambled past restaurants and cafe’s clinging to the cliffs, candles twinkling away, as diners seductively sipped Aperol Spritz and nibbled grilled baby octopus, as the sun set above a heartbreakingly beautiful bay.

Back to reality, we hit the strip, a blaze of neon lights, swerving around attack dogs, prams of screaming kids, and an obese chap on a mobility scooter, who was eating chips from a tray balanced on the stump of his amputated leg.

With pound coins burning holes in my ten and eleven year old daughter’s pockets, we spotted a ‘Zoltar’ fortune telling machine outside the “Coney Island” arcade, and headed in to play the Penny Falls machines. 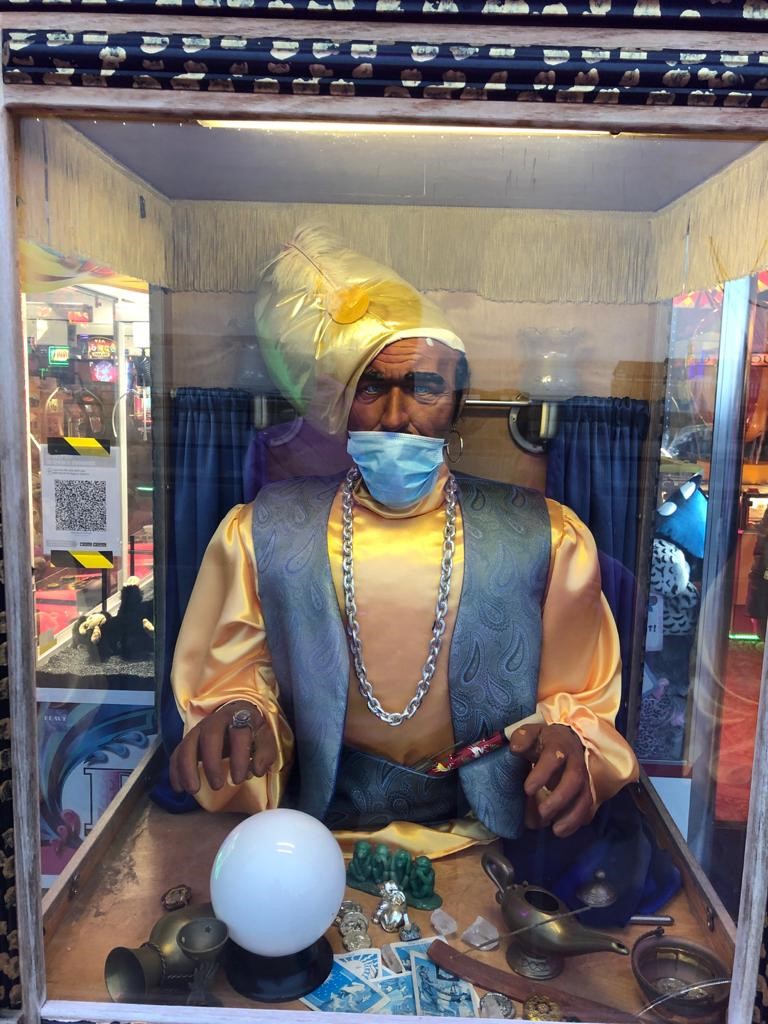 Within minutes of our arrival in this throbbing metropolis of flashing lights, ringing bells and shrieking sirens, my daughters were burning through cash quicker than Rishi Sunak in a pandemic.

Never have I seen such determination etched on their faces, as they furiously shovelled 2p’s down a slot to win a ‘Pop it’ key ring.

It would have been cheaper and quicker to fly to China and buy them direct from the manufacturer, but that shine of excitement in their eyes when they hit the jackpot, was worth the 45 mind-numbing minutes of “We No Speak Americano” by Yolanda Be Cool, that blared out from the machine on loop. 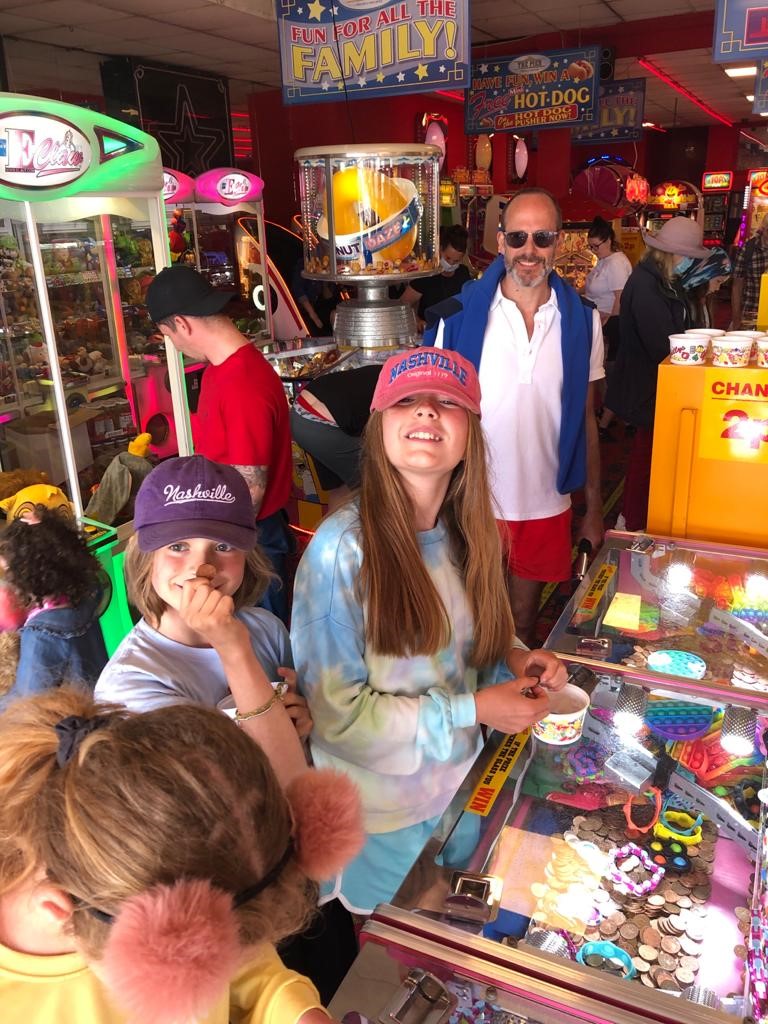 I suppose now and then we all have to bend the knee and take one for the team, like our trip to the waterpark, ‘Alpamare’ ,or as I like to call it, ‘Night-a-mare.’

To be fair, I’m just being facetious, and adored watching my eldest scream herself senseless, as we flew backwards down the “Snowstorm Run” on a massive rubber inflatable.

In all seriousness, Scarborough has a very special place in my heart, as it’s where my mother and father met for the very first time.

My mother and her sister and parents, used to stay at The Royal Hotel, a very swish place in it’s heyday, and my father attended one of their dinner dances.

During the night, the band finished a set and my father took to the stage and say down at the grand piano.

My mother’s father turned to her and said, “Jill, look at this chap, he’s going to make a right fool of himself.”

How very wrong was my Grandpa Norman…

In between slugs of his scotch on the rocks, he knocked it out of the park – a master of syncopation, he played  ‘Ain’t Misbehavin’, ‘I’ll Take Manhattan’, ‘As Time Goes by’ – and got the place jumping.

He certainly had her attention and by the end of the night, the last dance.

So, I thought it only right that I took Daddy’s Darlings to the place where the Yorkshire contingent of Team Michelsberg began.

It still retains much of it’s splendour, and entering the lobby sent a shiver down my spine, as I remembered the sweeping staircases, cocktail bar and snooker room.

After a shaky start, we really did have the most wonderful time. 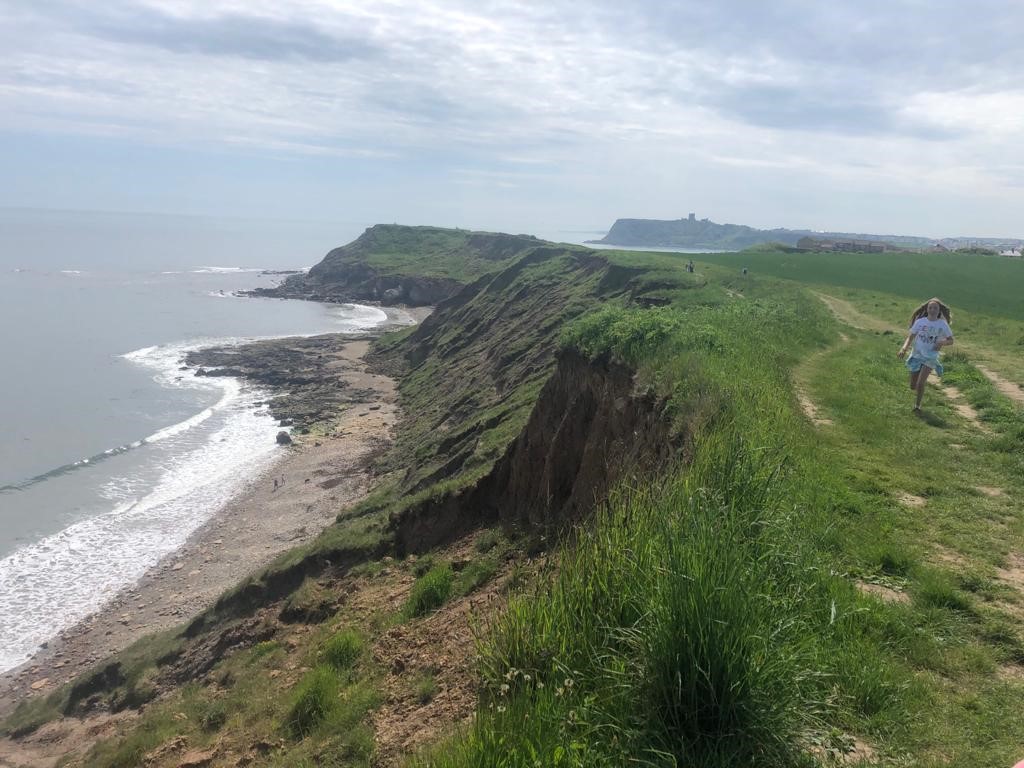 With phones switched off, we had a day trip to Whitby, fish and chips at the Magpie Cafe, stunning walks along the Cleveland Way, and for me, the highlight, an evening surf as the sun set, turning the clouds and waves a riot of pinks, blues and greens.

Right now, getting away from the UK isn’t easy, but I’m sure you’ll all agree that we have so many beautiful places on our doorstep.

To that end, I’ll leave you with a joke sent to me by my customer, Gordon Barker:

Jesus looked across the table and asked “So, where have you been the last few months”?

God replied “I’ve been all round Yorkshire.”

Jesus was shocked…”There’s been a pandemic for a year and you’ve been in Yorkshire!! What were you doing there”?