Bojo and the hobo

So this month saw the beginning of Brexit.

As an eighteen year old boy, I remember my father dragging me into the polling station in Bingley for my first General Election.

When I joked I was voting for Neil Kinnock, he entered my booth and to the gasps of poll workers, forcibly moved my pen towards ‘the correct’ box.

I didn’t really mind, and with the exception of watching “Yes Minister” and “The New Statesman” on the telly, my apathy towards politics remains the same.

I accept I should take more of an interest, if not for me, then for future generations to come.

However, the sleaze, scandals and never ending line up of disingenuous, arrogant, egotistical politicians that disgrace themselves on a daily basis, leaves me utterly uninspired to give the powers that (allegedly) be at Westmister, an ounce of my time.

Read a Manifesto? Give me a Jack Reacher novel any time.

The only time I take the slightest interest in a politician is with regard to what they are wearing.

My retinas are still reeling with horror at the recent clip of Dominic Cummings entering number 10, his Easyjet orange jumper and backside, hanging out of the back of his filthy grey jeans. 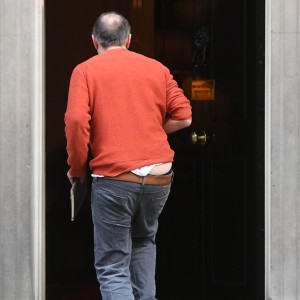 As Chief adviser to the Prime Minister, I’m staggered he considers this form of dress acceptable, when he knows the media and world at large is watching.

Dressing like a spice-smoking vagrant in his own home is fine by me, but not in public when he is representing the Government of the United Kingdom.

I agree with the old adage that dressing well is a form of good manners.

You do so to show respect for others, and this slovenly shag-sack of an ensemble smacks to me of disorder, neglect, or, much worse, arrogance.

How easy to spin this abomination as, “here goes a man so cocksure of himself, he feels he can dress how he damn well likes, and unlike the rest of us, doesn’t even need to try.”

Looking at his boss, Boris, I find his wayward hair and dishevelled, crumpled demeanour, also worthy of some discussion.

There are those who say this look is carefully cultivated, to promote fondness and a feeling he’s one of us, this messy, jolly, funny, buffoon like womble. It’s Italian ‘sprezzatura’ (considered carelessness) done the British way, that impoverished aristocratic devil may care disregard for frayed cuffs on a bespoke Turnbull & Asser shirt, with a patch sewn on the pocket of your Huntsman greatcoat.

The theme continues that this affable chappy, of rumpled appearance, will duly be underestimated by his rivals at the negotiating table.

Then, Wham!, this shaggy blond haired wolf in sheep’s clothing, will bare his teeth and ruthless intellect, to bring home the silverware for crown and country.

I do think the quality of his attire has improved slightly, but as a key figurehead for this country, there is still plenty of room for improvement.

I think he should take a leaf out of his political hero’s book, Winston Churchill, whose tailor of choice was Henry Poole of Savile Row. 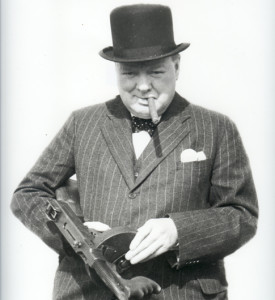 Here he is above, resplendent as ever, wearing one of their beautiful three-piece chalk striped flannel suits, with a soft, natural English shoulder.

To me, a well cut suit speaks of strength, dependability, order and purpose – isn’t that exactly what any voter looks for in a leader?

Politicians who get / got it right include David Cameron (who uses Richard James on Savile Row), Barack Obama, and Mark Rutte, whose hand-sewn lapel hole you can spot in the photo below. 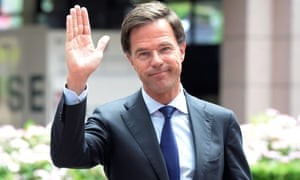 Throughout my life, dressing well has always given me more confidence, and the very act of having a shave, straightening my tie and polishing my shoes, mentally prepares me for the day’s work ahead.

There is a point, however, when vanity and over-preening becomes abhorrent.

The self-love I see in the changing rooms of the David Lloyd health club in Moortown often leaves me gobsmacked.

I’ve seen men, glued to the mirror, flexing their guns whilst blow-drying their hair, for longer than it takes me to remove (and perfectly fold) my three piece suit and get changed into my swimming kit!

As the aftermath of Brexit gathers pace, I am interested to see whether Boris Johnson, his chief tramp and the men in grey suits, can lay the foundations for a better Britain.

An optimist at heart, I believe so, and there is certainly a real feeling of optimism amongst my customers from all sectors, and long may that continue.

To the boys and girls of our great nation, who must now fight our cause on the world stage, I ask them to do so with honour, integrity and not an anorak or butt cheek in sight.