This month, the Michelsberg social calendar hit a serious purple spot, when my friends, Paul & Jo Flynn, invited my wife and I to attend Royal Ascot.

The first, and indeed last time, I wore my bespoke morning suit was at my wedding, eleven years ago.

Cut and sewn by three tailors based in North Leeds, they were some of my earliest manufacturing partners when I launched my business.

The cutter, Barry, had a sign outside his atelier (wooden shed) declaring himself a “sartorial artist.”

He was a lovely old chap, did a lot of work for the theatre, enjoyed fine dining at The Yorke Arms in Ramsgill and used to called me ‘petal.’

Wedding threads dusted down, I checked myself out in the mirror. Egad, not good!

The coat was huge, absolutely gigantic, and the centre vent at the back was sticking out like a dog’s leg in mid-tiddle.

As for the trousers, hilarious. Looking like The Fat Controller in MC Hammer pants, there was enough fabric to make a sail for a racing yacht.

And what on earth possessed me to choose a black double-breasted vest?

Whilst Herman Munster might have approved of my funerial-chic get-up, there was much work to be done.

Looking back, it seems Barry and the gang, had done an excellent job of talking me into the merits of wearing a marquee for my big day.

Luckily, I know a fabulous alterations tailor, who worked miracles on the coat, chopping it down to size, and he will no doubt, be holidaying in Barbados after selling the off-cuts.

Binning the trousers and vest, I treated myself to new ones, made up in lightweight cloth from Ariston of Naples.

Then all that was required was a Michelsberg bespoke shirt with extreme cut-away collar, half-Windsor knot (much to the chagrin of my younger brother, Edward) and Cheaney whole-cuts, mirror shined to perfection.

The car park for Royal Enclosure guests, resembled a Range Rover Dealer’s forecourt, and picnicking here is very much the done thing.

Gazebos were being erected of a scale and complexity that beggared belief, complete with sound systems, chandeliers and more starched linen, silver and crystal than Downton Abbey.

Our neighbours were four chaps with weak chins and plummy voices, who had brought their own man servant to pour the Champagne!

When it comes to style, Mrs Flynn (pictured in the white dress below) is unsurpassable and is without doubt, the hostess with the most-ess.

Here we all are, about to settle down to a lunch of lobster rolls, rare roast beef sandwiches, scotch eggs and vintage Bollinger champagne. Bloody marvellous! 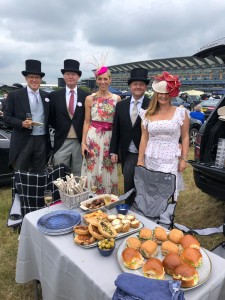 Deciding to leave the cheese board until later, was a shrewd move. No sooner had we finished the last morsel, it started to rain.

And when I say, rain, I mean rain. It was biblical.

Like Emperor penguins protecting their eggs in the Antarctic, we huddled together under brollies, a steady flow of Gin and Tonics helping us keep the British end up.

Laughing in the face of adversity is what we Brits are all about. Chuckle of the day went to Abi Whomes, who, staggering through the sopping mud in designer heels, voiced her concerns of developing trench foot. 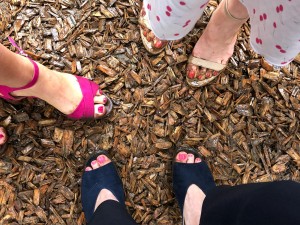 Seeking respite in the appropriately named ‘Tailors Champagne and Lobster bar,’ I bumped into Paul Johnson, owner of WT Johnson & Sons of Huddersfield.

Staggered he’d managed to tear himself away from the golf course, their business cleans and finishes the vast majority of cloth, woven in Yorkshire.

A visit to their facility is a real eye opener, and it’s fascinating to see how their machines and the ‘soft’ Yorkshire water, play such a vital role in helping to create the softest flannel, or, the silkiest worsted fabric.

It was great to catch up with a fellow man of the cloth, and then on the way home, I spotted a customer, David Mathews AKA ‘D-Mat’, who was hosting an impromptu 80’s disco party in the car park!

Royal Ascot is a magnificent day out. Dressing to the nines and being with great friends is always a hoot, but it’s the regal touch that adds the magic.

As the queen arrived in her horse drawn carriage, the National Anthem struck up and men doffed their hats. 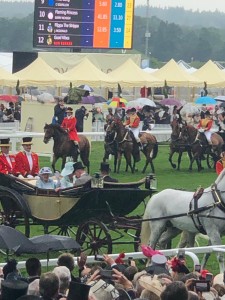 It was an unforgettable moment, nearly as rewarding as the four winners I’d backed, as a result of the fact, I liked the sound of the horses names…

Feeling a bit like an extra in (Netflix’s) ‘The Crown,” the day flew by in a flash, and all I really remember is laughing my head off.

From a tailoring point of view, it was wonderful to see so many fine examples of British Tailoring, with beautiful roped shoulders, hand-sewn buttonholes, double-breasted vests with mother of pearl buttons and high waisted trousers, all cut to perfection.

So, a huge thanks to team Flynn for being such wonderful friends and generous hosts.

Finally, note this – wear a Michelsberg suit at the races and it’s odds-on you’ll end up a champagne swilling, cohiba smoking WINNER! 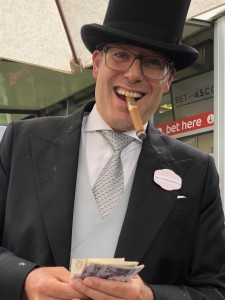