“The most happiest place on Earth.”

Last week, my time had come to take one for the team, as family Michelsberg headed off to Disneyland, Paris.

As we entered the park for the first time, my cup was, uncharacteristically, half-empty, dreading the prospect of horrendous queues, bad food and surly Parisians.

Fast forward two exhausting days later, and I can honestly say, there were some very special moments.

We’d only been in the place five minutes before a crowd of people started clapping and cheering, as some chap dropped down on one knee, and proposed marriage to his girlfriend on the bridge approaching the Disney Castle. 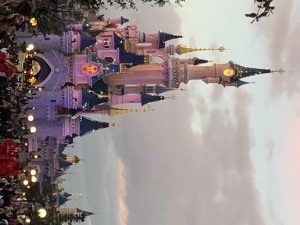 They looked Italian – olive skin, dark hair, enormous scarves, lots of layering, stylish leather boots – she cried, he cuddled, and despite tuts of disapproval from my inner Victor Meldrew, I found it all rather uplifting.

A couple of ball-clenching, teeth grinding, roller-coaster rides later with my eldest daughter, Avy, we wandered back to meet my wife and youngest daughter, Elizabeth, for the evening parade.

As the sun set, turning the sky a dusky pink straight from a Claude Monet painting, the Disney Winter-wonderland extravaganza went into overdrive.

Floats, festooned with flashing lights and sparklers, made their way down ‘Main Street,’ with Mickey and Minnie, Goofy and Donald, waving down from their blinged-up perches.

Between each shimmering platform, cheerleaders danced in velvet top hats and tails, swirling batons to a song straight from a Coca Cola commercial, preaching, ‘love,’ ‘peace,’ and ‘understanding.’

As Victor continued to haunt my mind, demanding sick-bags and citing Disney’s recent posted revenues of $13.22 billion gross profit on sales of $52.47 billion, I couldn’t help but smile and get into the spirit of things.

And then the moment came which made all the bad food (that was true) and queues (I think the Sales Of Goods Act 2015 would have a thing or two to say about Walt’s, “Fast Pass”) worthwhile.

Elizabeth, kitted out in full-blown Rapunzel dress and wig (her favourite Princess), waved her blonde ponytail at the ‘Real’ Rapunzel as she approached in her carriage with Prince Charming.

Prince Charming spotted her, nudged Real Rapunzel, who turned, beamed and waved at Elizabeth, mouthing the words, ‘you look gorgeous,’ and blew her a kiss.

Er, not really – flights, tickets, taxis, mouse ears, fried food, the list goes on, but worth it?

Do I want to return?

Unless, of course, like Price William & Harry, I was going to be chauffeured to the front of every queue in a heated golf buggy, complete with Fortnum & Mason Hamper, and then helicoptered back to Boujis for a bottle of Dom.

As far as surly Parisians go, I didn’t find any.

The miserable old cow working for Jet 2 on the outbound gate at Leeds Bradford, could learn from the charming French girls at Charles De Gaulle, and when we approached passport control (with the girls wearing their mouse ears), one of the guys in the booth started humming the music to the Disney ride, “It’s a small world!”

Two days later, the girls still buzzing from their Disney adventure, I headed down South to what is my idea of a perfect playground – Mayfair, London.

I was to be treated to lunch (which doesn’t happen very often!) by the guys who own Leeds Brewery.

Sauntering along the arcades and street’s of St James’s is to me, what meeting Princess Ariel was to Elizabeth – magical – without the 90 minute queue.

My first port of call was my annual pilgrimage to Bates, on Jermyn Street, to treat myself to a Christmas hat.

Ross, their salesman, suggested I try their “Weekender,” a rabbit fur felt trilby, which has a shorter brim than the beaver fur Fedoras I’ve historically purchased. 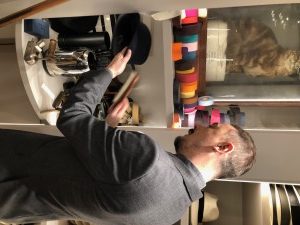 Whilst not as light, thin and silky as beaver fur – which felts tighter, performing better when wet (ahem) – I loved the shape, and after a quick steam and brush-up, left a happy chappy.

It was then off, on a recommendation by my friend, Herr Larking, to see the gentlemen at James J Fox, to procure my contribution to the day’s festivities – Cuban cigars.

I got chatting to one of their team, Nic Barker, and asked him how long he’d worked there.

Here was a chap who knew his nicotine steeped onions. 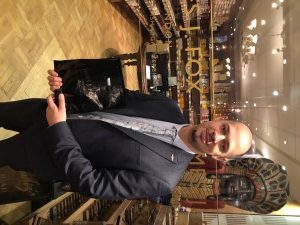 I told him what I liked (Cohiba Robustos, Montecristo Petit Edmundos) and he said try a Partagas Serie D no. 4.

His forthcoming description was worthy of a literary award.

He spoke of, ‘balance, a cool, full flavour, with leathery, earthy notes towards the wrapper, and a signature zing of spice throughout.’

Sold. Three of those please, squire. 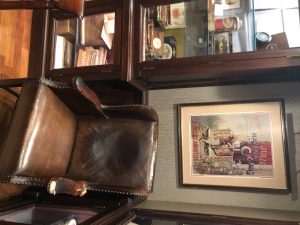 After wandering downstairs to check out their museum, which includes Winston Churchill’s smoking chair, it was off to lunch.

My customer, Michael, is a member of the Royal Automobile Club on Pall Mall.

Not to be confused with the RAC, it is one of the finest private members clubs in London, with bedrooms, banqueting rooms, three restaurants, marble swimming pool, squash courts, billiards room and Turkish baths.

After a quick quaff in the bar, I entered, for the first time, “The Great Gallery.” 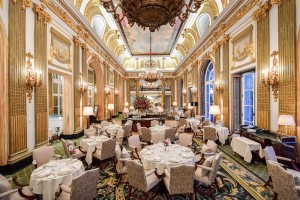 With soaring fresco ceilings and more gold leaf than a Leeds 17 bathroom, my jaw fell to the floor.

Seated like an Emperor, what followed was a masterclass in attentive service, and a plate of venison in a blueberry and bitter chocolate sauce, that would have Greg Wallace gurning in delight.

After a truly memorable lunch, it was then on to Sam’s club, The National Liberal Club at Whitehall place.

Founded in 1882, that sense of tradition and old school glamour slaps you round the face like a duelling glove, the second you walk into the place.

An awe-inspiring, curved marble staircase, sweeps down to a chandelier strewn lobby, off which a multitude of oak panelled club rooms hunker down, amidst a reverent atmosphere of hushed decorum and dignity.

Throughout the club, there is the use of decorative Victorian Leeds Burmantofts tilework, but for us, it was all about the terrace overlooking Whitehall Gardens, the Thames and the London Eye.

It was here, that Cognacs were swirled amidst a warm fug of Havana’s finest, as the three of us savoured a magical day off work, worthy of the great man himself, Ferris Bueller. 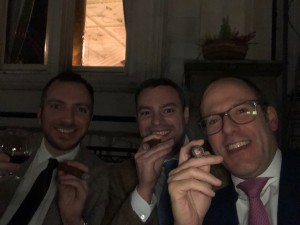 Disneyland has a slogan, “The most happiest place on Earth.”

For Daddy’s darlings, I have no doubt this is true, but for me, it’s wherever I get together with good friends and enjoy life’s simple pleasures.

On that note, I’d like to thank you all for the laughs we’ve shared this year, and wish you and families a wonderful Christmas, and the very best for 2019.

As they say in Paris, “Bon Noël à tous!”