Heading out of the Victoria Quarter this month, I was confronted with something that for me, cast a cloud over this sun-soaked Great British Summer.

Lads, stripped to the waist, swigging from bottles, a cacophony of “It’s coming home!” delivered from slurring, red faces.

Decked out in my panama hat, tan leather briefcase and linen suit, the peaks of several baseball caps swivelled in my direction.

From the looks on their jeering faces, I felt a cordial invitation to join them for a vape and a can of Stella, most unlikely.

My first football match, was watching Bradford City in the directors box at the age of 13, as the shirt sponsor was my father’s best friend.

I still chuckle when I remember my father whispering to me, “It’s like watching a film, where the hero dies.”

To be honest, the best things about it for me was the half-time pies, and since then, as far as “The Beautiful Game” goes, I’ve never really been a fan.

The best thing for me about the world cup was selling a few extra vests (waistcoats) off the back of Gareth Southgate’s working ensemble.

From what little I saw, I thought he looked rather smart and that, in my view, is to be applauded, but the tailoring of his waistcoats let him down a little.

The cardinal sin of a vest is being too short, with the wearers shirt flapping about underneath.

It needs to be long enough to cover the waistband.

His was too short, producing a look that resembles a five year old boy, forced into a Moss Bross wedding-rent-a-suit, doing Peter Kay style knee slides across the dance floor. 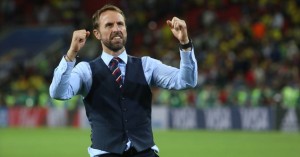 To be fair, marks must be given for leaving his last button undone, and not wearing a belt underneath.

Belts (and belt loops), as many of you will know, are not actually required if a pair of trousers fits.

To me, one of the hallmarks of a pair of bespoke trousers, is having metal strap and buckle fasteners on the sides of the waistband. 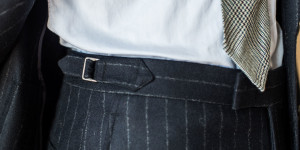 They look cleaner, sharper, and some would argue that wearing a belt, ‘splits you in half’ and makes you look shorter.

His other, and far more serious crime, was to have “It’s coming home” woven into the cloth.

Tongue in cheek, or not, weaving letters into a fabric is a shocking waste of money, and so damn tacky it makes me shudder.

The cage fighter, Conor McGregor, who to give him credit, does wear some well tailored suits, is also a plaudit of this horror-show of bad taste (see photo below) and I’ve a good mind, the next time I see him, to give him a piece of my mind. (Jiu-Jitsu Green belt, two tabs). 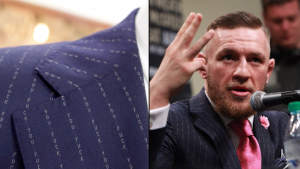 As far as waistcoats go, I’ve owned more of them than Giles Coren’s had hot dinners.

They are the very essence of sartorial delight, elevating a suit to a different level across a multitude of genres – be it a ‘Peaky Blinders’ tweed number with a high-opening lapel, an understated ‘Bond’ chalk-stripe, a ‘Pitti-peacock’ check, or, an ‘Extraordinary’ Ascot double-breasted stunner, with flat bottom and shawl lapels.

The only reason not to order a vest when commissioning a suit is pounds, shilling and pence.

And if you don’t, you’ll regret it.

I’ve learnt the hard way that there will always be a time (and event) in your life when you wish you’d had that waistcoat to go with your two piece suit.

My mother-in-law always says at Christmas, “a cake without cheese, is like a kiss without a squeeze” and it’s exactly the same for a suit and a vest.

And if you eat too much cake and cheese, your waistcoat is the best early warning device on the planet to reign in those calories!

So, for all you poor footy fans out there with a two piece suit hanging in your wardrobe, here’s what a friend from Croatia sent me on WhatsApp. 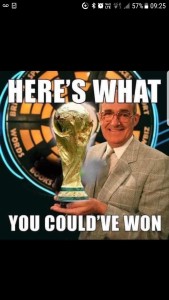 Wishing you all a wonderful summer!