The former writer A.A. Gill declared that, “in your thirties, you are too old to wear a T-shirt anywhere but in the gym, you can’t do hoodies any more, or trainers, you should be able to tie a bow tie and you can’t wear shorts in the city. Forty is when you check yourself for all the signs of being a kidult. So, no more jeans. Ever.”

A. A Gill struck me as a sophisticated, elegant man who clearly loved his bespoke suits. He wore a trilby, and ‘dressed down’ in flat caps, tweed jackets, cashmere jumpers, check shirts, flannel trousers and Northampton’s finest on his feet.

The English gent look suited him down to a tee, and I’d agree with most of what he said above – the more mature man should be very careful not to appear as “mutton dressed as lamb.”

But to me, the essence of dress, and what works, has nothing whatsoever to do with age. It’s about attitude and confidence.

I was recently dining at the Flying Pizza in Leeds, when perhaps the coolest dude I’ve seen in ages, meanders through the restaurant to his table. 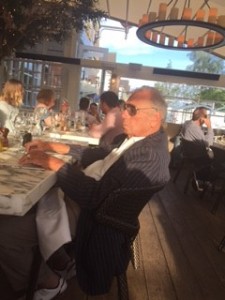 He had presence, oozed gravitas and gestured with his hands like Don Corleone.

The photo doensn’t really do him justice, but was the best furtive photography I could manage, without ending up sleeping with the fishes.

One of the things I love about going down to London, is the regularity and variety of stylish people you encounter across all age groups.

On one recent trip, I recall a silver fox with slicked back hair, stepping out of his gunmetal Aston Martin dressed in a stunning double-breasted suit with roped shoulders and mirror shined shoes.

A little later, wandering down the Burlington Arcade, I clocked a European fortysomething, in crumpled deconstructed linen blazer, pleated chinos, aubergine suede loafers, with a pashmina draped round his neck and man-bag.

Both looked fabulous and yet so very different.

One of the wonderful things about my job is the huge variety of people we deal with, from young, thrusting entrepreneurs, to middle aged ‘retirees’ who are enjoying the fruits of their working lives.

A certain Leeds based ex-lawyer called David, pictured below, is parading a proper Michelsberg head-turner at York races. 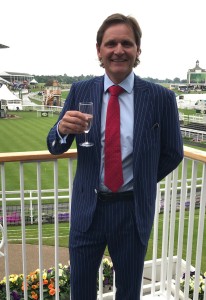 It’s made-up in a vibrant royal blue cloth from a merchant in Napoli, with a punchy white pin-stripe. He’s certainly got the chutzpah to carry it off and is a cheeky nod to his days as the “Wolf of Wellington Street.” ; – )

As a chap enters his forties and beyond, he is at risk of loosing his sartorial way. Becoming a “Kidult” is a very real danger, second only to joining the beige anorak brigade.

Whilst there is always the safe, classical A.A Gill route to go down, I like the idea of (for me) aging disgracefully, like the guy at the Flying P.

I’m not talking about pot-bellies and football shirts, nor, wearing a brocaded silk shirt open to the navel, a la Mick Jagger, but being willing to experiment and try different stuff.

I look forward to becoming really “eccentric” – a fabulous excuse for dumping the rule book and messing with the considered opinion of what’s acceptable.

As A.A. Gill said, “The best thing about dressing up at 60 is that you can start wearing other people’s national costume: djellabas, kurtas, Austrian boiled wool, Sami hats.”

Whilst my skinny legs rule out Lederhosen, I could get really excited about sporting a cool white dish-dasha for summer.

Time will tell how far off the beaten track I will tread, perhaps in those really cool red shoes worn by the Pope. 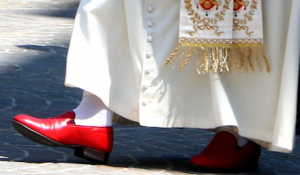