This month I had the pleasure of sharing my ten-year business journey with up-and coming start-up businesses, at a Leeds Enterprise Network event, held at the Yorkshire Post offices in Leeds.

Whilst determination, enthusiasm, self-belief and luck have played a large part in keeping me on the right track (I’m hardly a big success yet!), there are  several individuals who must be credited for their guidance and support.

One was a chap called Graham Rigby. It was Graham (of the Baird Menswear Group) who trained me to measure people up, checked over all my initial orders and even (on his own time) visited my customers with me so I could watch him do the fittings. Sadly now dead, he was a cheerful, cheeky, fag smoking grafter, who loved the trade and on more than one occasion got me out of a tight spot!

Another, and the central character of this post, is Walter Grimes, whose funeral I attended today. 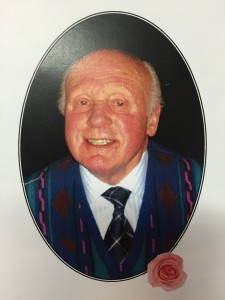 Founder of Carl Stuart Ltd, he is in my eyes, a true tailoring legend.

Speak to any cloth merchant, or tailor, and most will have heard of, or, have a story to tell about Walter.

Initially working as a PE instructor in the RAF, he enrolled on a pattern drafting & tailoring course at night school in Leeds. To earn a few quid on the side, he started measuring-up his colleagues at Catterick, and then hot-footed it down to Leeds to get the suits made-up.

Aged 30 years old and with the birth of his first child Nigel, he was forced to move his burgeoning business from the spare room (now commandeered as a nursery by his wife, Lois) and decided it was time to do tailoring full time, and took over the premises of a retiring tailor in Wakefield.

By 1980 he’d built his own manufacturing facility, employing over sixty people, with two retail shops and supplying trade customers throughout the UK and beyond. They’ve made trousers for the tallest man in the world, suits for Elton John and Donald Trump.

To me, he possessed many traits of the stereotypical Yorkshireman. With a bullshit radar the size of a NASA space-station, he called a spade and spade. He told it, as it was, and once he’d made his mind up on something, that was it.

There was no doubt he could be blunt and was certainly a force to be reckoned with. God help the wife of a customer who pointed out a ‘problem’ during a fitting. They would be given centre stage, whilst he sat on the table, swinging his legs, and then would say “can the tailor talk now?..” before sending them scuttling back off to what he called, “the critics chair” in the corner.

A “schmoozer,” he was not. A little prickly on the outside, he did however, have a soft centre, and once he’d got the measure of you (and approved!) there was genuine warmth, and a dry and rather Pythonesque sense of humour. He’d often appear in the workroom wearing strange wigs, hats and oversized spectacles.

His right hand man, Patrick Gaughan, who worked for him for over thirty years, gave a wonderful tribute. Dignified, heart-felt and full of emotion, he spoke of Walter as an ‘old school’ boss. He’d prowl the factory, calling out, “whose talking?” and he was, in Patrick’s words a “workaholic,” never “switching off.”

He spoke of how he took genuine pride in his product, deeply cared for his workforce and his presence (and overseeing eye) was felt from the cutting table to the pressing room.

Despite considerable financial success, trophy cars and flash watches were not his style, although he did have a love of flying and bought a small plane with two friends.

He got a kick out of running a successful business, delivering a high quality suit, and the loyalty he showed to his staff (even in the depths of the recession in the early 1990’s) was unwavering. Many of the lads and lasses in the workroom have been with him for well over twenty years (some forty!) and that’s for a good reason.

There are very few tailors in this country who have come anywhere close to achieving what he has done. He was a man of integrity, a self-starter, bristling with energy, you knew where you stood with him and someone commercially you could depend on.

Privately, the softer side shone through even more. He gave generously to charity, refereed football matches for the prisoners at Wakefield Prison, was a wonderful grandfather to his grand-daughters, Hollie and Katie, and was adored by his daughter, Jane, who now runs the business.

As I said at the beginning, most people in the trade have a story about “Uncle Walter.”

Mine involves a vigorous discussion about the merits of coloured buttonholes. After spitting several feathers at me, he gave me a gentle squeeze on the shoulder and said: “James, you’re a grand lad, you’re doing it, but get organised. Very good.”

I will miss him. The world of tailoring has lost one of its stars and will be a darker place without him.