I will always adore the swagger and sleek lines of a jacket with full chest, roped shoulders and nipped in waist.

That said, I can appreciate my Melbourne based brother Edward’s penchant for the softer, more informal approach to tailoring, that is very much in vogue at the moment.

I’ve just delivered this ‘de-constructed’ jacket to my customer Simon, for Ebor day at York races. 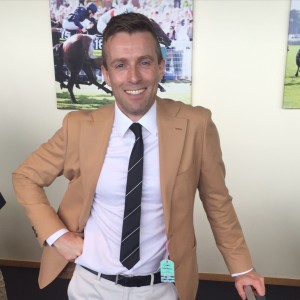 Unlined, with no shoulder pads, no canvas, no interlining, it’s basically a tailored cardigan, made up in a cloth from one of my favourite mills in the country – Fox Flannel of Somerset.

Ever since, I picked up a tape-measure, I’ve been seduced by their fabrics.

Like Ralph Lauren, I am a big fan of more natural looking cloths with a more ‘milled’ finish, rather than their “clean cut” shinier counterparts.

Many of my customers like fabrics with sheen, and whilst there will always be a place in my heart for the lustre and opulence of a fitted mohair suit, a flannel to me, is the epitome of an English suit.

Understated, elegant, dependable, who better than to showcase this product, than “M” in the Bond film “Skyfall,” wearing a navy worsted chalk stripe from Fox, made-up by a tailor whom I have the utmost respect for, Timothy Everest. 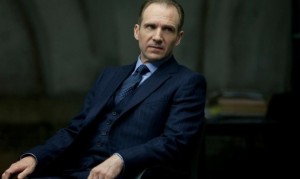 They have just sent me their latest bunches and the worsted flannel collection is something to behold.

I’m particularly taken by this wonderful chalk stripe below, which I’m going to have made up in a double-breasted number, with roped shoulders so monumental, they will need spikes on top to keep the pigeons at bay. 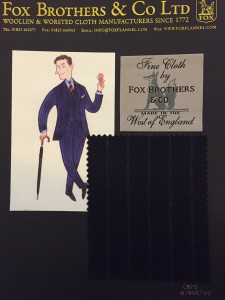 Whilst my suit will be formal as hell, it is the soft handle of their flannel that will make it the perfect choice for my customers who are embracing a more laid back approach to dress.

Perhaps for a jacket to be worn with Japanese selvedge denim jeans and a pair of sneakers, or, teamed with chinos, Tods loafers and an open neck shirt.

As a brand, Fox has been around since 1772, but to be honest, it is only the last 5 years, they have come into their own.

When I started ten years ago, they had one dusty bunch that often had issues with stock.

Now they’ve nearly a dozen, have just been featured in the Rake Magazine and their retail arm ” The Merchant Fox” is going from strength to strength.

Partnering with the best in breed of British Manufacturers, they are making (with their top end fabrics) throws, cushions, clothing, luggage and accessories.

So, I picked up the phone, smiled sweetly and asked to speak with their Managing Director, Douglas Cordeaux (pictured below), to find out more about what’s going on with the Somerset massive. 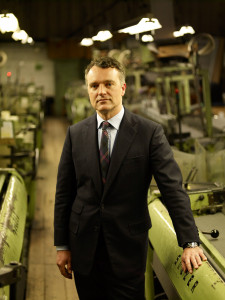 To be blunt, I can’t stand dull people. I’m probably a bit ADHD (suffering form inattentiveness, hyperactivity and impulsiveness) and would much rather be shocked, outraged and infuriated by a passionate pitch from a gibbon, than put up with the rambling, droning tones of a dullard.

Luckily for me, Douglas was a complete legend, and for nearly an hour he kept me spellbound at the end of the line.

A design consultant working for Pepe Jeans, his role 8 years ago was to seek out and evaluate the feasibility of working with UK manufactures at a time when Made in England was back in vogue. His opinion then was it was “difficult, but not impossible.”

During this period of his career, he started nattering with Jeremy Hackett, co-founder of “Hackett”, (and now owned by the Pepe Jeans Group) and the name Fox Flannel came up.

Then, run by Jack Hudson for sixteen years, the company was in bad shape. Financially it was making a loss and had little in the way of strategic direction.

On the other hand, with its rich history, heritage and provenance, might this be a company / brand that could be turned into something special?

After all, these were precisely the values that would tick all the boxes for a more discerning international customer happy to pay more for quality.

Born only fourteen miles from Fox, he also studied textiles at Taunton college, and so when he visited the mill for the first time, it was rather a special moment.

Seeing a group of talented and passionate people, actually making something in a way that had been done so for hundreds of years, was highly seductive.

So, he turned to his childhood friend, and “Dragons Den” star, Deborah Meaden, who was also a local lass to Fox, and whom like Douglas, saw the value inherent in the fledgling business.

They quickly became business partners with a plan to make the business relevant and profitable.

Inspired by Italian companies, like Loro Piana and Vitale Barberis Canonico, they wanted to turn Fox into a brand, not just a cloth manufacturer.

Through clever initiatives with brands like Jack Wills, product placement in “Skyfall” and “Kingsman”, re-vamped marketing material, a new website, and (as I can testify) wonderful product development , these guys are now motoring.

Their footprint is global, with 45% of their wholesale business (selling larger quantities of cloth to big brands) from Japan, and are making big strides in France and Italy.

Their “merchanting” business (flogging cloth to the finest tailors in the world) is also on the up and up!

They are now making a profit with a plan to build on their “Merchant Fox” line, seeking out and working with the best artisans in the world to produce luxury products for the connoisseur.

At the moment, as a business, they are still relatively small beer. Just twenty eight people in the South West of England, weaving cloth like they’ve done for generations.

But things are now very different. There is passion and pride in their product, the marketing is spot on and the business is being driven by a man who is clearly on a mission.

As I head down to Croyde Bay in Devon tomorrow, for a week away in the sun and surf with my family, I’ll raise my panama hat to these guys off the M5 and wish them the best of British for their future together.