According to the Rake Magazine this month, skinny bottoms are dead.

I’m not talking about the recent spate of plus size models twerking their bodacious booties in Vogue magazine, but a gentleman’s trousers.

Commercial necessity dictates that the wheel of fashion must constantly turn, and every designer wants to be credited with bucking the trend and trailblazing the next big thing.

When it comes to bespoke tailoring, Rome wasn’t built in a day, and despite what the cognoscenti might say, a slimmer silhouette is still the flavour of choice for my customers.

The razor sharp suits of the 60’s need no introduction.

Sean Connery’s (Anthony Sinclair) grey three piece in Goldfinger is probably one of the reasons why I fell in love with clothes and got into tailoring in the first place. 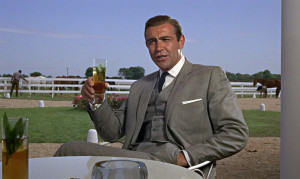 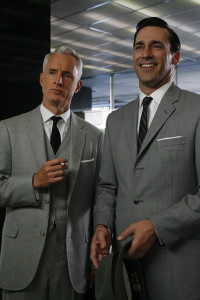 Whilst Roger (on the left) occasionally flaunts an epic double-breasted number that would give Anderson & Sheppard a run for their money, for the most part, it’s all slim lapels, narrower pocket flaps and trousers that hug the leg and kiss the shoe at the top of the laces.

I am, and will for ever, remain a huge fan of uber-fitted threads, however, I am open-minded enough to see merit in a more laid back approach, particularly for customers with a fuller figure.

To be fair to the boys and girls at The Rake, I take their point.

If I had a pound for every picture on instagram of an aspiring dandy, sporting 15 inch ankle-grippers above a highly polished double monk shoe, I’d be typing this missive from the balcony of my villa on the West Coast of Barbados. 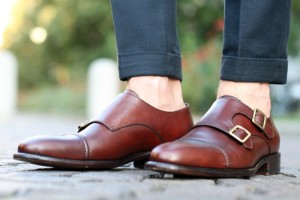 As a tailor, of course you need to follow fashion, but what is of the upmost importance is a true understanding of proportion and balance. Width (and style) of lapel, gorge and button position, where the trousers should be worn, are all vital considerations when trying to flatter a man’s figure.

Experience is everything and having a good eye is vital, as well as having the confidence to tell a customer when you think he’s barking up the wrong tree.

It’s all very well wearing trousers like leggings, if you’re a leafy youngster with heroin chic thighs and calves, but that’s not the case if you’re built like a prop forward with legs like filing cabinets.

A guy with a forty six inch seat, twenty six inch thighs and eighteen inch calves is going to look like he’s wearing a pair of jodhpurs rammed to the gills with sausage meat.

Another trait of the skinny bottomed trouser is the way it is often cut to be worn low on the hips. That’s absolutely fine if a guy has a short body and long legs, but is the kiss of death if you are built the other way round.

Simon Cowell gets grief about his high waisted trousers, but here I must jump to his defence and say that I think wearing the trousers a little higher creates a longer, more flattering leg line.

Check out the photo below of my Grandpa, Norman Suthers, in his “Oxford Bags,” shirt collars raised, a la Cantona! 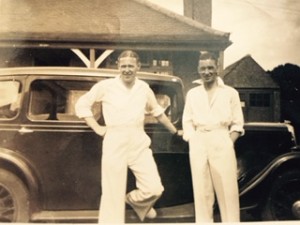 Here was a man who was always immaculately turned out. Relatively small in stature, I think that by wearing his waistband high on the tummy makes him look taller and rather dashing.

I adore the generous cut of those wide trousers. It helps to showcase his slim waist, before my Grandma’s Yorkshire puddings and meat and potato pies got the better of him!

There’s a touch of Errol Flynn’s swagger, and if you look back at the matinee idols of days gone by – Cary Grant, Dirk Bogarde, Rudolph Valentino – most of them wore clothing that was more relaxed in fit with a little more fluidity about the whole proceedings. 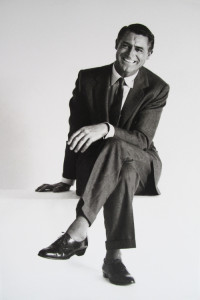 Judging by some of the latest menswear collections from some of the worlds most influential designers, this is the way things are going again.

For all you lovers of skin tight, nut hugging, hip skimming bobby dazzlers, I’m afraid the tide is turning against you.

On the upside, I, as your tailor, raise two fingers as to what is deemed de rigueur on the catwalks of London and just want to make you look good.

If skinny is the way to go, then so be it; at Michelsberg tailoring, it’s all about you.

A wise man once said there are three people you should listen to in life: your priest, your wife and your tailor.

As the latter, I promise I will always do my utmost to capture your own sense of style and balance this with something that flatters your form and physique, not David Gandy’s.