The Earl of Oxford Street

As a surfer, I dream about the perfect wave.

I’ve searched far and wide, from Devon to Bali, and it’s proven pretty illusive – much like the perfect suit.

On a daily basis I’m on the hunt for the finest of threads. Instagram. The Rake Magazine. Trips to Florence and London.

Excellence is everywhere but there is one place that has seriously stoked the sartorial fires that glower within me.

The suits and clothing on the TV series of “Mr Selfridge.” 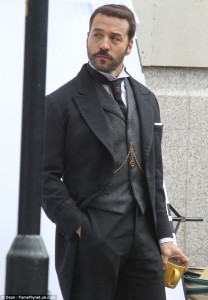 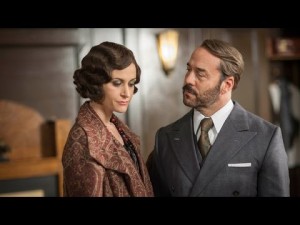 From the fabulous morning coats of the first few series, to the magnificent double-breasted lounge suits and dinner jackets of the final series, I’ve been left goggling at the perfect fit, attention to detail and sublime fabrics that have been showcased to perfection.

Beautiful hand-sewn button holes in silk twist thread, straight as a die. Wide peak lapels and uber-roped shoulders, the crown of the sleeve proudly sitting above an imposing shoulder line.

Quality. Utter quality. I’ve often wondered who are the people behind such a magnificent wardrobe?

On a recent ski-holiday to Italy, I was waxing lyrical about the above to one of our gang, a presenter and journalist currently employed by ITV Yorkshire. She was kind enough to put me in touch with a contact at Dench Arnold, the agency behind the BAFTA award wining costume designer (and fellow hat lover) that is James Keast, the man behind the threads of Mr Selfridge. I explained to his agent I was a huge fan of the show, the clothing in particular, and would it be possible to have a natter with the man himself?

Last Friday he called me from his home in Dumfries.

Sounding a bit like Frankie Boyle, with a wicked sense of humour to match, an hour of our time flew by. Open, honest, he shot straight from the hip and spoke freely about the highs and lows of working with the various actors and productions he has been involved with.

His first job was as an apprentice pattern cutter at an Edinburgh costumier, and the first garment he made was a three piece suit, with high-waisted pleated trousers. In his own words (and like my own tailoring course at Batley college) it “taught me how much I didn’t know!”

He cut his teeth as a costumier at the London firm Bermans & Nathans as a bridge between their designer and cutter. For three years he learnt his trade, researching designs for costumes, sourcing fabrics, watching fittings, building up a network of trusted tailors, coat-makers and costume hire agencies.

As our conversation babbled on, it became clear to me that his role is not just about being creative and making beautiful clothes. It’s crucially about managing very tight budgets, working to deadlines and, on top of this, juggling the whims and desires of highly demanding actors, producers and directors.

He told me that the costume budget for a series of Mr Selfridge was around £220k. I said that sounded like quite a lot, but he explained that when you divide that by ten (the number of episodes) and then split that between a core cast of 30 people, each requiring different outfits (not forgetting the hundreds of ‘extras’ involved throughout filming), the budget per costume can easily shrink to £150.

I struggle to buy a decent suit length for that price, so it’s not a lot of money when you need to create something to reflect the style and status of a wealthy Londoner, living the high life in Edwardian and Victorian times!

James said one of the favourite parts of his job is doing the research. He’ll check out vintage shops, go on-line and see what’s available from costume hire companies like “Cosprops” in North London. Sometimes, he’ll decide to make a garment in house and then it’s all about hunting down the right fabrics and assembling a team of makers that will do the job justice.

One of his favourite tailors is Chris Kerr and his father, the legendary Eddie Kerr, who have been making bespoke suits in their shop in Soho since the sixties. 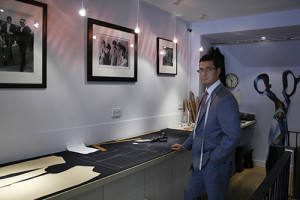 I’ve been a fan of their work for a long time. They offer the real deal – truly bespoke, full canvas, hand-sewn, hand-cut – but the service is much more chilled than some of their counterparts on the Row.

James very much enjoys being there for all the fittings, and as I know myself, it’s not always plain sailing.

He articulated his frustration with aplomb when Jeremy Piven (who played the role of Mr Selfridge) decided to hit the weights and bulk up his chest by a couple of inches during production. As any tailor will tell you, it’s always easier making a suit smaller, as you can cut excess cloth away, but the inlays can only be let out so far…

‘Muscle-gate’ kicked off when he complained his double-breasted waistcoat still felt tight after alteration, his PA taking matters into her own hands, and cutting open the bottom of the side seams with a pair of scissors.

Patience, as well as organisation skills, was one of the other virtues he quoted as a key requirement for the job. No kidding. I’d have gone mental.

In the early days of Michelsberg Tailoring, I worked briefly with a lovely old tailor called Barry Thewlis, who did a lot of work for Opera North and theatres up and down the country. He would regale me with tales of highly strung actors and tetchy producers who wanted things done yesterday.

Pressure to deliver on time is one of the crosses that every tailor must bear. I’m bang in the middle of wedding season with about seventy wedding suits in the pipeline – all with a deadline that cannot and will NOT be missed! 🙂

Luckily the vast majority of my customers are a genuine pleasure to deal with, but like every business, I still get the odd ‘tricky’ customer who needs to be managed.

Whether you are tailoring for the silver screen, TV, or a groom about to take the plunge, the skills remain much the same. Enthusiasm for the trade, getting the right team around you, being organised and above all, doing it with a smile on your face.

The suits of Mr Selfridge are to me a triumph, and what a pleasure to speak with the guy who pulled it out of the bag.