As your tailor, I’m going to ask for a moment of self indulgence.

Whilst most of my blogs are chipper missives, based on the wonderful world of bespoke tailoring, this one is different. It’s a tribute to my father, John Ernest Michelsberg, who died at the age of 76 on Wednesday 11th March.

Now before you start cringing and scrambling for the ‘off’ switch, I’m going to keep things upbeat and as relevant as possible to the world of fine threads.

First, he was a textiles man, as was his father, Ernst, before him. They fled the family home in Berlin to escape the evil Mr Hitler, landed in London, moved to Bradford, and set-up Wool & Rayon Waste Limited on Leeds Road.

In his early days, my father’s dream was to be a concert pianist, but his father suffered from ill health from an early age, and he was shouldered with the responsibility of looking after his mother and running the family business.

At seventeen, he was driving round Europe in a VW beetle, selling textiles, and by his early twenties, was flying round the world opening up new markets in Africa, the Middle East and Asia.

Here he is, bearing what I think is a striking resemblance to Nicolas Cage, stepping off a flight from Madrid. 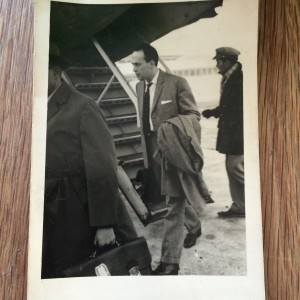 As you can see, he was a snappy dresser. Rocking a very sixties slim lapel and skinny tie, he had his suits tailored by the legendary Max Freeman of Leeds.

He also had clothes made in Italy. I can still remember a particularly dashing, double breasted cashmere overcoat, that I sequestered from his wardrobe, and wore at college with the obligatory ripped jeans and DM’s.

His father before him was always immaculately turned out. Check out his wonderful tie  and mother of peal stick-pin in the picture below – love it! 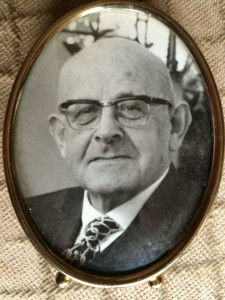 He always wore bespoke suits and shirts (with detachable cuffs and collars) and was never without a Homburg.

My father too was no stranger to head candy and wore a Panama in the summer, and a Fedora, or, Akubra in the winter (sourced for him by my brother who lives in Oz).

I have also decided to maintain the hat-wearing tradition and my weapon of choice is the Borsalino.

So it seems, dandyism runs in the Michelsberg blood. My brother, over for the funeral, nearly upstaged me in a beautiful charcoal suit tailored by P Johnson in Melbourne and shoes from John Lobb.

We had heated debate about the pro’s and cons of ‘cuffs’ on the trousers, and the Four-in-Hand vs the Half-Windsor, but brothers will be brothers (even though the ‘first born’ is usually right!)

Whilst he adored the good things in life, nothing made my father happier than making those around him feel good.

I can still see him sitting at the grand piano in the lounge, a scotch and soda on the go, tinkling the ivories as friends and family laughed and wallowed in front of a roaring log fire.

Here he is in action.

He was, and always will be, my hero.

I would like to finish with a line from William Shakespeare:

“The purest treasure mortal times afford is a spotless reputation”

I believe my father leaves this world with just that – a spotless reputation – and for good measure, a twinkle in his eye, and a smile on the faces of those who loved him.