On Monday 23rd December, Christmas came early at Michelsberg Tailoring with an exciting delivery from the elves at UPS. 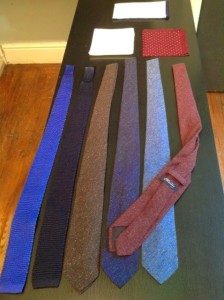 With the frenzied excitement of my three year old daughter Elizabeth, faced with a new “Frozen” costume, I ripped off my Hermes number and slipped on a burgundy Donegal, secured with my favourite knot – the half-Windsor.

My subsequent preening was then rudely interrupted by Charlie, my twenty two year old side kick, who informed me that I should really be using the Four-in-Hand.

When it comes to tying one’s neck-candy, the question of which knot to use is overwhelming. The half-Windsor, full-Windsor, Four-in-Hand, Double-Four-in-Hand (Prince Albert), Balthus, Trinity, Pratt, Nicky, Kelvin, Fishbone are just a few for consideration.

Any of the above can be viewed using the powers of Google and You-Tube, but for the purpose of this little missive, I’m going to stick with two, as they represent two very different schools of thought.

In the red corner: asymmetrical, smaller, slightly elongated, and often called the “school boy’s knot” we have the Four-in-hand. 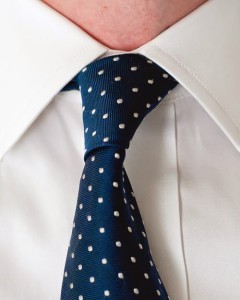 In the blue corner, symmetrical, looks like an inverted triangle, the half-Windsor (it’s larger cousin, the Windsor, often called the “foot-ballers knot”) 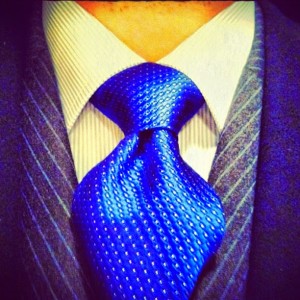 Technically, what works best for you will depend on how spread (open) the collar is, the size and proportion of your face, the tie itself (weight of fabric, its dimensions) and of course, the style of the coat you are wearing it with.

The Four-in-Hand Knot, because it’s smaller and longer, works well on shirts with narrower, or button down collars, skinny or medium-width ties, and men who have slimmer faces with a more defined chin.

Take for example, Mr Connery in the picture below. 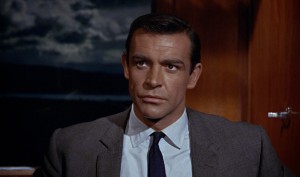 His skinny, knitted silk tie and slim 60’s style lapels add weight to the above. As far as his chin goes, it’s certainly slimmer than mine after several Christmas dinners and seven days on the sauce.

In From Russia With Love, Ian Fleming wrote that, “Bond mistrusted anyone who tied his tie with a Windsor knot; it showed too much vanity. It was often the mark of a cad.”

Strong words that must be taken with a pinch of salt, particularly when considering he also said “sumo wrestlers can retract their testicles.”

I now call two chaps into the Witness box as further ammunition for my defence: 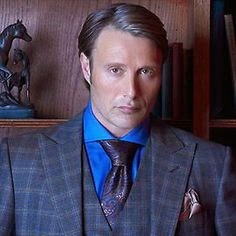 Here, I think the Windsor knot is a perfect foil for this outfit. It works well with the cut-away collar and echoes the V line created by those fabulous wide, plunging, pointed peak lapels.

2) Patrick McNee from the Avengers 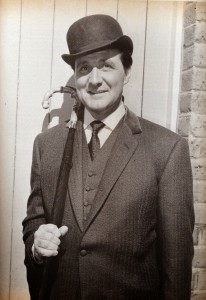 One of my true style heroes. Immaculate, dandified but certainly not brash. Everything has been considered and laundered to perfection. The starched shirt-collar, vest, lapels and tie all work together in perfect harmony, creating razor sharp lines. Here is a man for whom a wonky knot simply wouldn’t do.

Being realistic, both the four-in-hand and half-Windsor knots each have their own merits, and neither would disgrace a Michelsberg bespoke shirt and suit.

To me, choice depends less on size and proportion and is more about your character and how you wish to be seen by others.

If you are a regular reader of GQ, the Rake Magazine and participate in various online style forums, there is a widely held belief that the four-in-hand is the Gentleman’s knot of choice.

They argue that because it is imperfect and slightly askew, it creates are more free-spirited, laid back impression and is more unconventional.

A man, frequently lauded by the above is Gianni Agnelli, the “Rake of the Riviera.” 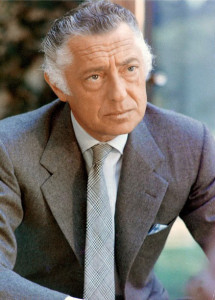 Here was one seriously debonair dude. A bon viveur and lover of Caraceni bespoke suits he epitomised what the Italians call “sprezzatura” – defined by the Oxford English Dictionary as “studied carelessness”.

Effortlessly chic, too cool for school, to me, this is the heart and soul of Italian dressing.

Creating an air of apparent modesty and nonchalance, and living with your Mother to be able to afford it 🙂

Knitted ties aside, I’ll always be more of a Steed than an Agnelli, but don’t let that polished exterior fool you.

Behind that velvet top collar and Whangee umbrella, lies a mischievous heart and a disgraceful sense of humour.

Ciao for now and here’s wishing you all a wonderful start to 2015.