Blue sky, twenty seven degrees, and a white-wine and Peroni soaked crowd of suits, are wallowing on the sun-drenched pavement outside the Bar & Grill.

Now is the time of the year to kick back and suck the marrow out of every bone Mother Nature throws at us.

Earlier this month, I decided to take a cheeky day off, and my wife and I headed down to Wimbledon for the tennis.

With yet another glorious day on the cards, and wanting to look the part, my first port of call was to my favourite hatters Lock and Co on St James’s street, to treat myself to a Panama hat.

Armed with my new head candy, we jumped on a bus and crawled along the streets of gold to the grass lawns of the All-England club.

To be honest, tennis isn’t really my game. The highlight for me was the nimble footed lineswoman who, a dead ringer for Miss Marple, was a magnet for an extremely powerful Russian’s serve.

Watching the old dear, busting shapes to avoid getting clattered by a tennis ball, reduced me to a giggling wreck.

After three hours of play, I’d had enough. My long-suffering wife, Nikki, agreed we could up sticks and head to Mayfair, where there just happened to be a couple of tailors I wanted to visit…

First stop was Spencer Hart’s new flagship store on Brook Street. Here I am with Moaz, one of their Sales Associates. 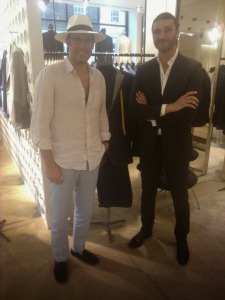 He’s the one in the black suit. Not the Michael Winner look-a-like showing more chest hair than Simon Cowell.

Ten years ago, I visited their shop on Savile Row and met Nick Hart, the founder.

For someone just starting out in the trade, it was pretty inspirational stuff. Dark wood, soft jazz music, razor sharp threads on the wall. The place had soul, a real edge to it.

Since then, they’ve gone from strength to strength, building their brand and launching successful ready-to-wear and made-to-measure collections. They now have a truly international presence, dressing numerous high-profile celebrities.

In a past life, the new shop was a bank, and Moaz was kind enough to let me check out “The Vault,” their underground, luxury personal shopping suite.

Whilst upstairs is “L.A” bright and beautiful, the darker side of Spencer Hart was once again revealed.

Very much a Bond villains lair, you’d be very happy to chill on the leather banquet and select a vintage Rolex, or, commission a bespoke pair of velvet slippers. 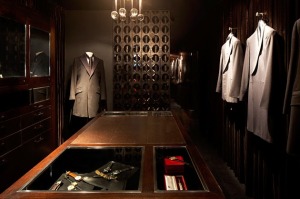 Next on the radar was Thom Sweeney.

Based on Weighhouse Street, these guys are currently making a real name for themselves and deservedly so.

The two founders, Thom Widdett and Luke Sweeney, used to work for Timothy Everest before sailing off on their own ship.

I met with Thom and Matthew Gonzales, one of his junior cutters, on a recent trip overseas and it was clear to me then that these guys have style and ambition in abundance.

Their signature dish is the “Horse-shoe” vest, served with a side order of old-school glamour. They’ve also recently launched a ready-to-wear line and I have no doubt we’ll be hearing much more from them in the near future.

Matthew was in their basement workrooms when I arrived and gave me the grand tour. Their shop was fabulous. It oozed with charm and character and like the chaps themselves, impeccably attired.

Judging by the pile of re-cuts he had to do, business is brisk for them at the moment!

After that, it was time for cocktails.

Heading down Bond Street towards Soho, we passed Sotheby’s, the auction house. Directly outside was a crowd of photographers and a sign in the window: “Impressionist & Modern Art Evening Sale.”

One of my customers, Paddy, works for them at a senior level and so, seizing the day, I wandered across to the doorman (dressed in full morning suit and top hat) and enquired as to whether he was in attendance.

He popped inside to find out. Moments later, a frightfully British chap, who introduced himself as Harry, bustled through the door. We were greeted like long lost friends and swept inside.

After eight years in tailoring I can spot a five grand suit at twenty paces and this place was rammed to the gills with them.

The rarefied atmosphere buzzed with expectation. The art-strewn walls, a shimmering backdrop, to this cultured oasis for the wealthy, privileged, and beautiful.

It turned out Paddy had just left, but Harry ushered us into the sale room and proceeded to give us the lowdown on paintings by Monet, Picasso, Renoir and Mondrian.

The collection raised just over one hundred and twenty million pounds. Not a bad little earner for a Monday night’s work.

I later found out that Harry was in fact, Lord Harry Dalmeny, Deputy Chairman of Sotheby’s. It’s not often I’m given a private tour of art-work by a member of the peerage. Surreal.

We were ‘papped’ as we left the building (hilarious) and the best was yet to come. Dinner at Bocca Di Lupo.

If there are three words you must remember from this post, these are it. Utterly, totally and unequivocally the best Italian food I have eaten in this country.

The courgette flowers filled with mozzarella and anchovy were boules of joy. The roast suckling pig with grapes, white wine and bay, so unctuously magnificent, I felt bereaved when it came to an end.

London really is, a truly special place. Wonderful things can, and will happen for you there, if you have the desire to seek them out.

Fine threads, good food and a smidge of culture are always on my hit list, and as usual our wonderful capital city delivered.