On Wednesday 12th February at 6.30pm, I was formally announced into the inner sanctum of the Merchant Taylors Hall in the City of London.

Based at Number 30 Threadneedle Street, this has been home to The Livery Company of The Worshipful Company of Merchant Taylors’ since 1343, and tonight was their annual Benevolent Association Dinner.

As far as events go in the world of fine threads, this is the ‘Big Kahuna’, the ‘Bomb-Diggy.’ I’d kindly been invited by the cloth company Scabal to join their table.

With adrenalin and champagne surging through my veins, I stepped into a stunning oak-panelled room to be greeted by the great and the good of British textiles and tailoring. Weaving my way through some of the sharpest suits on the planet, I hooked up with my hosts.

Introducing Robert Oakes, roving ambassador of the North for Scabal, and the lovely Hazel Edmonds, who runs the office at their flagship store on Savile Row. 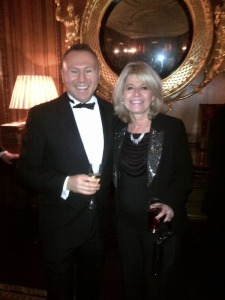 When it comes to service, these guys set the bar. Efficient, warm, and a genuine pleasure to deal with, they are a credit to what is arguably the most forward thinking and commercially minded cloth business in the world.

It was also great to meet and spend some time with their retail sales manager, Ricky Sahota. 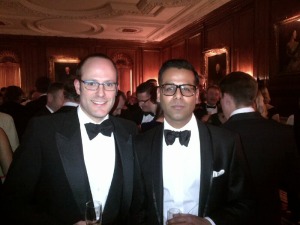 No stranger to the joys of wielding a tape-measure, he, like myself, is on the sharp-end of things, and handles the made-to-measure side of the business.

Over a fabulous dinner, we traded war-stories, drank white wine, red wine, port, and commiserated on his 6.30am flight to their head office in Brussels the next morning. Ouch.

Seated next to me was Terry Brown, a former President of the Merchant Taylors Company. 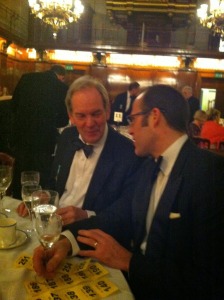 With more than forty years service to Scabal, his loyalty is matched with a reputation for kindness and fair play.

One of the most well connected chaps on the Row, his tales of life in the rag-trade and on the ‘Golden Mile’ were an utter delight.

After dinner, our speaker was Nigel from “The Apprentice.” 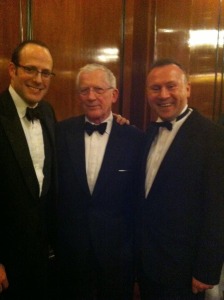 After that, it was time for a stiff drink at the bar and it was here that the party really got started.

Here I am with Paul from Huntsman, and Leon, bespoke trouser cutter at Anderson & Sheppard. 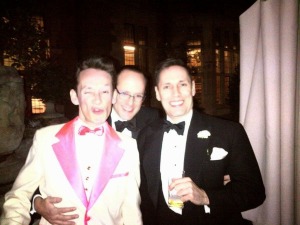 At the start of the evening, things were a little bit starchy and stilted. Hushed tones, polished shoes, an overriding sense of decorum.

Then in walks Paul in his white and pink John Travolta special. The room cheered, shoulders dropped and everyone eased-up. The world needs more people like Paul. 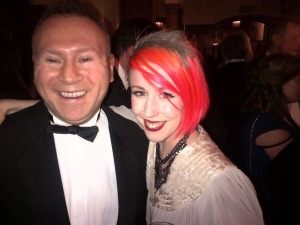 Here’s Robert having a quaff with Emma Martin, coat-maker for Dege and Skinner. BBC’s Young Tailor of the Year for 2012, she bubbled with enthusiasm for her trade.

That evening, positivity ruled the roost. It was wonderful to see the place crammed to the rafters with young, ambitious tailors. The future of British Tailoring is bright. And it likes a drink.

I crashed at 3am. Two Nurofen, a glass of water and four hours sleep later, my pink, bleary eyes cracked open to face another day. I wandered down to the river from my hotel in Monument and was faced with this. 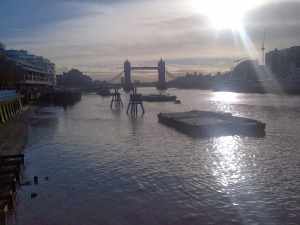 London rocks. I jumped into a cab and headed to my spiritual home (after Croyde Bay in Devon), Savile Row. First stop was Number 13, Stowers Bespoke. Ray Stowers was on my table the previous night and had invited me to pop into his shop. 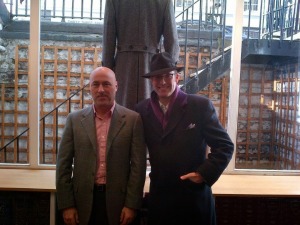 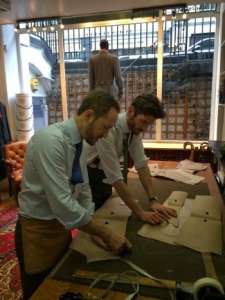 A relatively new addition to the Row, prior to this, they had offered their bespoke service via a concession at Liberty on Regent Street.

They are a young team, were great fun on the night and had also consumed their fair share of pain killers that morning.

Next up was one of my firm favourites, Chittleborough & Morgan, and a meeting with the living legend that is Joe Morgan. 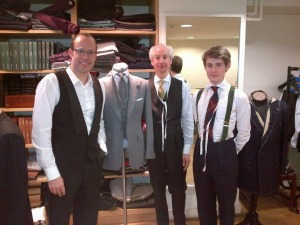 Joe, along with Edward Sexton, were the talented hands behind the stunning suits of Tommy Nutter.

“Nutters” was the place to go in the seventies. They dressed all the big names (Elton, Jagger, The Beatles) and my very next suit (almost finished!) is a nod to their stunning work of days gone by.

I particularly liked this little number in their showroom. 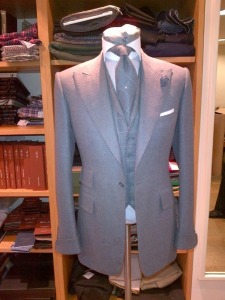 Then it was next door to Number 12, Scabal, to check out their newly refurbished showroom. 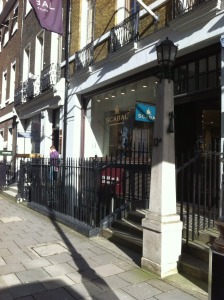 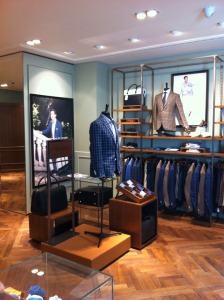 Not bad eh? No wonder they have to charge such high prices for their schmutter! 🙂 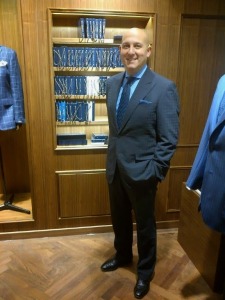 By now I was flagging. The hangover was winning the battle with Reckitt Benckiser’s little helpers. I needed sustenance and fast.

So, off to Soho to meet my friend Flynny for lunch, but not before popping in to say hello to my ‘old friend’ Mark Powell, who I’ve mentioned recently in a previous blog. 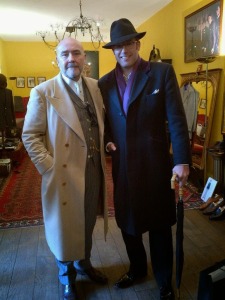 The food at Yauatcha on Broadwick street was fabulous. Try their tea-smoked ribs. Incredible. And then it was off to Kings Cross and back to Yorkshire where all the civilised people live 🙂

As my train left the thumping, pupping heart of Mother England, I had once again been inspired by a city that makes me want to do more and be better.

When it comes to threads, London is ‘The Show’ and I will not rest until ‘Michelsberg’ gets a place in the limelight.