So, will it be ‘Calvin’s’ for Christmas?

Money says the shedding of wrapping paper at Casa Michelsberg will reveal a white box, emblazoned with the image of a smouldering footballer. 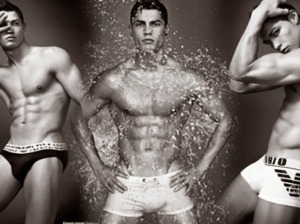 His body, a waxed temple to muscular perfection, laughs in the face of love-handled lesser mortals. Sullen eyes, lowered towards his slim waist, fall on a cotton pouch, so tight it’s possible to tell his religion.

This bushy tailed beacon of virility and athleticism might cause many a chap to ‘suck in’ beneath his dressing gown, but the truth is that a man’s underwear is often the weakest link in his wardrobe.

Only yesterday in the health club, I stepped over a particularly offending pair of pants. This threadbare ode to age and neglect, was no doubt discarded by the same Neanderthal, who likes to use the hair-dryer on his bits and bobs, and throws foot-powder around for us all to walk through.

The victim of a thousand machine washes, the colour had transcended into a mouldy blue hue, with so many holes under the faded elastic waistband, it would have struggled to support an arctic shrew.

But is support what we should be looking for?

As far as fertility goes, keeping the family jewels cool and unrestricted is the name of the game, so the nut-hugging ‘briefs’ promoting ‘superior support’ by Mr Klein & Co might just be an exercise in marketing.

The alternative to briefs is of course boxer shorts and the ‘freedom’ they provide the wearer. Massive in the Eighties they had their heyday when Nick Kamen stripped down to his smalls in a launderette for a Levi 501’s commercial. 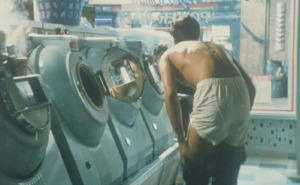 I remember a pair of silk boxers I bought for a black-tie ‘ball.’ Utterly horrendous. They rode up to the point of castration and the cold material made me feel like I’d wet myself.

I’ve just been approached by a company that make bespoke boxer shorts. They provide a couple of different styles, contrast stitching and monogram options, and said they’ll make me a pair for free. Whilst I’m interested in the end result, deep down, like Ronaldo, I’m a briefs man.

That said, I would vigorously shout down those with no obvious entry / exit mechanism. Who was it that decided the fly, or “Y” front was superfluous to requirements?

Pulling a highly elasticated waistband down, just below the marble pouch, is an accident waiting to happen. One false move and you’re a eunuch. More’s the case, what does the chap next to you at the urinals think? Whose the freak that likes to waft his goolies about??

When it comes to colour, white seems very popular. I find this strange. If I had to pick a carpet for a room in my house that had a greater chance of getting a bit mucky, – the ‘boot room’ perhaps? – I’d probably shy away from laying a white carpet.

As for fabric, cotton is king. Something in silk? I’d sooner have 18oz Harris tweed.

Your choice of smalls is a bit like marmite – you’re usually either in one camp (boxers), or the other (briefs). Any other camp (commando / La Perla thong) and you need a good talking to.

So, only four weeks to go until Christmas. I’m pretty sure Santa and his elves are busy right now, filling his sack, with a little something to snuggle yours 🙂

Looking forward to seeing you all at the Michelsberg Customer Christmas Party on Friday 6th December from 5.30pm!