There aren’t many professions where you inform a customer that you’re going to give him a ten inch rise in his trousers.

The ‘rise’ in the world of tailoring is the difference between the outside and inside leg measurements. In simple terms it’s roughly the distance between the top of the waistband and the bottom of the fly.

At Michelsberg Tailoring, there are two cardinal sins when it comes to making a pair of strides. A baggy arse (or ‘seat’) and a floppy crotch (or, to give it its proper name if you’re a chap, a ‘fork’). Too much rise and a pair of pants can resemble a wet, saggy nappy. Not a good look.

That said, too little rise, particularly on a man with a large seat, and you’re on dangerous ground. Nobody wants to see someone prancing about in a pair of nut-huggers with his proverbial balloon knot on display.

A pair of trousers should look ‘neat’ and above all feel comfortable to wear.

There’s a real sixties vibe going on at the moment and most of the trousers I’m making are very fitted, to be worn low on the hips, with narrow bottoms. This style calls for a shorter rise with many a pair resembling those in the picture below. 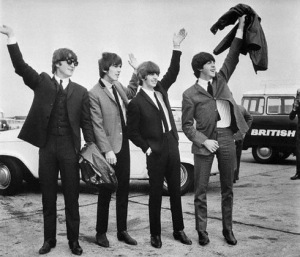 If you’ve got thin legs and a relatively slim build then these can look very flattering. Not so, if you’re a prop forward with a fifty inch chest with thighs like filing cabinets.

Getting a pair of trousers right requires a good understanding of proportion and getting to grips with what a customer wants and is willing to put up with.

Oscar Wilde said, “Clothes should hang from the shoulder, not the waist.” I’m pretty sure he was talking about trousers and the debate surrounding belts versus braces.

As a schoolboy, I adored the film “Wall Street” and was so impressed by Michael Douglas’s braces that I invested in a pair of my own. 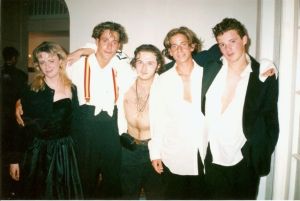 Here I am at a ball in Harrogate, with ex Bradford Grammar School boys Messrs Brunning, Brayshaw and my brother Edward. Clearly the young lady on my right was unimpressed by my scarlet and yellow striped lovelies, but I think I might have had better luck with the young filly below 🙂 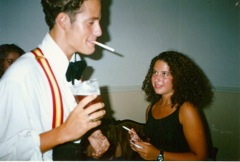 Wearing trousers with braces has two distinct advantages. Firstly, because they are worn higher (and therefore require a longer rise than the hipsters I mentioned earlier), it makes the legs look longer. This can be seen in the picture below of me lighting up a Marlboro Red.

Secondly, because they are quite literally hanging from the shoulder, they can be fitted loosely around the tummy. This leaves plenty of room for expansion if you want to indulge in a long lunch, sumptuous dinner, or, beer and pie fest.

When it comes to buying braces there are two firms that immediately spring to mind – Albert Thurstons, who supply to the great and the good on Jermyn street and Savile Row, and the American firm Trafalgar.

Forget those with metal clips as they can damage the cloth. What you need are loops of soft gloving leather with hand stitched button holes, like my wedding braces below. 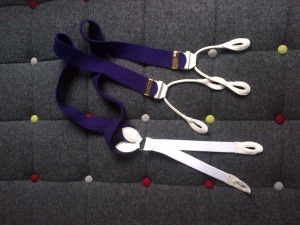 These naturally require brace buttons which are sewn inside the waistband, often with a ‘split-back’. Some of my customers prefer the more old-school style where you have a ‘fish-tail’ back with the buttons on the outside, as illustrated in the picture below. 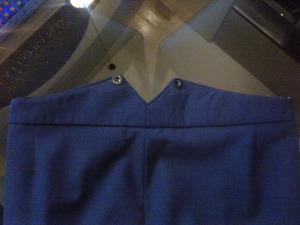 Whilst I could extol the merits of braces until I’m blue in the face, there are many chaps out there who simply refuse to entertain them. They either don’t like the feel of them on the shoulder, or, have concerns of resembling Bobby Ball, or, a character from a Dickens play. 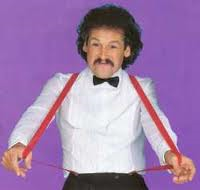 The alternatives are a belt, or, having strap and buckle side fasteners on the waistband which are pictured below. 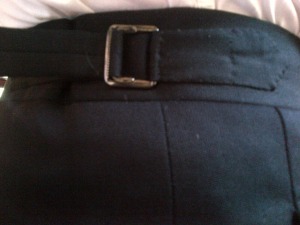 These are my favourite choice at the moment. They are very much a nod to the world of bespoke tailoring, work well with braces, and as a bit of a flashy git, I like some bling on the side of my trousers.

Over the past twelve months, I’ve done the hipster, flat-fronted, skinny legged thing to excess and have decided it’s time to revisit my youth. Whilst I’ll keep the bottoms fairly narrow, I’m going to break out the braces, go large on the rise and throw in a forward pleat or two.

As for the gorilla mask and Cherry Docs, least said, soonest mended! 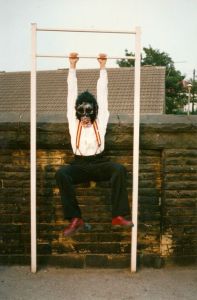