Doing “The Baz” in Ibiza

I’ve seen that look in my customers eyes before. Desire, longing, want. Every new Bond film spawns a thousand suit fantasies and the latest catalyst for sartorial spending has been The Great Gatsby.

God bless The Silver Screen. I remember the ‘Unit 4’ cinema in Shipley when I was a child. A lurid horror-show of artex walls, sticky floors and velvet jump seats with built in ash-trays. This was the home of “Ghostbusters”, “Cocktail”, “the Karate Kid” – my friends and I transfixed as the lion roared through a smog of Marlboro reds.

How times change. I’d decided to check out DiCaprio’s latest flick at “Everyman” cinema in the new Trinity shopping centre in Leeds. Ordering my tickets at ‘the bar,’ this was a far cry from my youth, where a man, who’d clearly given up on life, sold stale Maltesers and warm Pepsi from behind a scratched perspex kiosk.

I was asked whether I’d like my beer chilled, or served at room temperature. Yes, there was still time to order a pizza (which they’d bring to my seat) and the seat turned out to be a sofa, complete with plump cushions and a side-table. So far so good.

Sadly, the film was rather underwhelming. The acting was fine, there was glitz, glamour and frilly knickers in abundance but the story had all the depth of a flea’s paddling pool. So, let’s move on to more positive aspects, and in fact the reason why I went in the first place – the clothes. 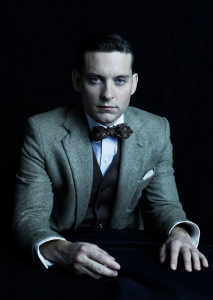 From the off I was in seventh heaven. Enter stage right the tweed jacket. I adored the bellow patch pockets, half-belt on the back, and the way it had been styled with a bow tie and pocket hanky. 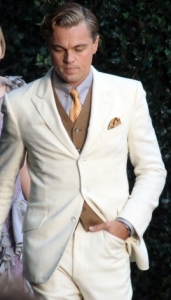 Then came Leo’s white linen suit. I have a love / hate relationship with ‘whites’. On the plus side they look so damn rakish. Perfect for chilling on the deck of a gin palace, or, if you’re Tony Montana, visiting a cocaine field in Columbia.

On the down side, white fabrics are transparent and the seams, pocket bags and your underwear are often visible underneath. Heavy linen masks this better than a fine wool cloth, but then you have to live with the creases. What’s the alternative? Go commando? Use a heavier, thicker cloth and fully line the trousers?? Do that and you’ll end up sweating like a Scouser in Dixons.

In theory, wearing white is a great idea but in practice it can be a bit of a nightmare. 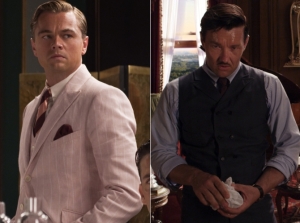 The stand out for me was his pink suit. What a fabulous outfit. I loved the stick-pin through the shirt collar and the tie complimented the cloth quite beautifully. Truly stunning. And how about the double-breasted waistcoat on the right with the widely spaced buttons. Wonderful. 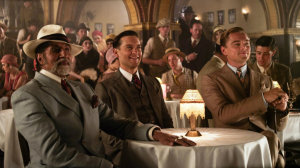 The double-breasted number above was yet another triumph and here is further proof just how much a hat can elevate an ensemble. If you’re looking for a Panama, then there’s always James Lock & Co, or, Bates in London, however, a customer recommended a company called Pachacuti in Derbyshire and they look the business (and are a fair trade organisation).

I’ve heard a few grumbles on various clothing forums that the costumes were not historically accurate for the 1920’s. As far as I’m concerned, it captured the mood and spirit of the time perfectly, and whose really bothered if the trousers were a touch on the slim slide.

A very good customer of mine recently commissioned this bobby dazzler below. 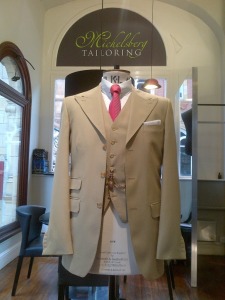 He’s a true gentleman and a huge fan of vintage clothing. It’s inspired from days gone by and certainly wouldn’t look out of place quaffing champagne on Gatsby’s terrace in Long Island.

I’ve dressed it with a linen pocket hanky, a Michelsberg bespoke shirt (with stick pin) and tie, and the pocket watch is my own. As a tribute to the film’s wardrobe department, I only think it fair I should call it “The Baz.”

As of this Friday, my wife and I will be having three wonderful nights away in Ibiza (sans kids) to celebrate Flynny’s 40th birthday with Jo, Rach, Loz, Georgina, Chandon, Mark, Jo and Lu.

As the corks pop and martinis flow, to the throbbing bass and shaking hips of the coolest clubs in the old town, I’ll raise a toast to those bright young things of the 1920’s, who set the bar when it comes to doing decadence with style.