Yesterday, I was visited in my showroom by a man of the cloth. Not in a Dan Brown, cassock and collar kind of way, but as a purveyor of quality textiles to the tailoring trade.

We’ve been doing business together for 7 years and I felt it was high time I visited them at their HQ in Keighley. Selling fabrics to tailors is only a relatively small part of their business, and contributes about £1million to a turnover of £20m, largely derived from corporate-wear and a retail division. 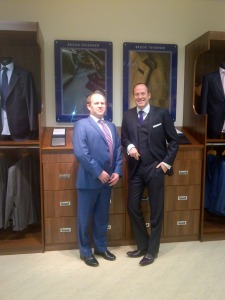 Their set-up is different from the Yorkshire mills I deal with, such as William Halstead and Taylor & Lodge, as they don’t do any of the weaving themselves. In essence they are merchants, buying in bulk from mills, often importing cloth from overseas, and then dealing it to tailors in cut lengths. I suppose this makes Simon the “Tony Montana” of the textile trade. 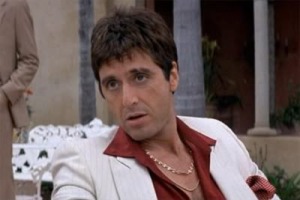 I could just see him rocking up to Première Vision (a big textile show) in a white three piece and snarling at the exhibitors, “Eh, wha’ da %!*k do you know ’bout Super 130’s?!

Being sensible, Simon is an absolute gentlemen of the highest order and once we were settled down in their showroom, was only too happy to give me an insight into their business.

It starts with looking for a gap in the market, often achieved by visiting the two hundred tailors they deal with up and down the country and asking the right questions.

I love friendly, cheerful, vibrant blues, and designs with a bit of umph. English mills are uber-flexible when it comes to working with designers, but when it comes to holding stock (to be sold internationally in ‘cut-lengths’ to tailors) most of their stuff tends to be ‘typically British,’ which means elegant and understated.

Not so, in the case of Bower Roebuck of Huddersfield (part of Scabal), who most certainly do produce stuff that’s got the scaramoosh factor. They are constantly bringing out new, seasonal collections, but these are made in very small quantities. On the up side, this keeps things very exclusive, but on the downside, means they can (and do) charge like a wounded rhino.

So, Simon and his chums recently did a smash and grab at the mill Barberis of Italy. When it comes to dress, Italians are the peacocks of the world, and this is reflected in the colour and design of their fabrics.

As a fully vertical mill, they offer a wonderful selection of stock supported ranges and seasonal collections to designers and merchants, but expect relatively big orders in return. A deal was done, and a new Brook Taverner bunch was born.

It might not be as exclusive as Scabal’s, but it does mean I can offer something a bit different to my customers at a very good price, and it will be available for at least three years. Molto bene.

They’ve also recently brought out a new ‘tweed’ jacketing bunch. Tweed is incredibly popular at the moment, particularly for short, fitted jackets to be worn with jeans. I’ve got one in my wardrobe that makes me feel like a rutting stag.

Nevertheless, not everyone likes a bit of rough, so they went on the hunt to produce something in a softer blend of wool, cotton and cashmere, which has the tweed vibe, but not the handle.

The project started with a trip to Arthur Harrison’s in Huddersfield, a mill owned by the Bulmer & Lumb Group. They had a chat about what they wanted to produce, sample yarns were sourced, and six to eight weeks later a sample ‘blanket’ was woven. This brings to life the proposed designs across a number of different colourways as shown below. 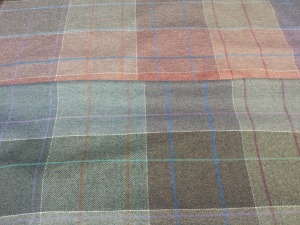 A selection is made, and fifteen weeks later the cloth is produced and then finished at Holmfirth Dyers. Each design is woven in a minimum quantity of sixty metres, and within a bunch (a selection of cloths), you’ll have around fifty designs so things start getting expensive.

Add to this the costs of producing the three hundred bunches (made by the Pattern Book Company in Halifax), that are sent out to tailors to show to their customers, and you are looking at an initial investment of around a hundred grand.

Here’s Colin below, in Brook Taverner’s pattern room, with the bunches behind him. If you’re a customer of mine who has asked for a small swatch of the material you’ve chosen as a record, he’s the chap that sent it to you on my behalf 🙂 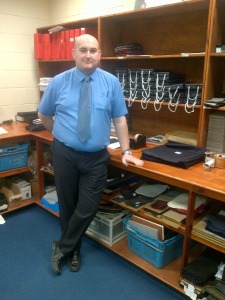 It’s then time for Tony Montana to cross his fingers and hope he’s got it right. If he has, then he avoids the helicopter and noose and Keith is kept busy cutting out lengths to send to people like me. 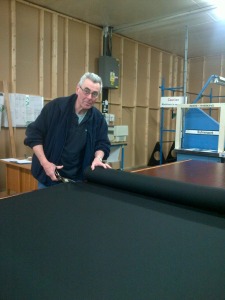 Brook Taverner is a very successful business. It employs over a hundred people, is recognised as the leading corporate wear supplier in Europe and on the cloth side, is going from strength to strength.

Whilst my heart will always leap for joy at the sight of something being made in this country, it’s still great to see a local business doing so well.

After all, as Eddie Temple said, in the film ‘Layer Cake,’ – “The art of good business is being a good middleman.”

I’ll drink to that.