The beard is back. Even my brother is growing one. A face full of fur smacks of swashbuckling “derring-do.” It’s testosterone on a chin. The hirsute marque of heroic daring.

Beloved by World War two fighter pilots and pipe-smoking chaps who raced along country lanes in their Morgans, a bristling moustache embodied the spirit of British invincibility, but like many things, it’s often hair today, gone tomorrow.

Facial fuzz is no longer a foible of the few. The birthright of a geography teacher has been embraced by the many, with varying degrees of success. What starts off in the mind’s eye as a dead ringer for Tom Ford, can quickly transmogrify to Jeremy Beadle in the mirror.

The meterosexual male has given way to something altogether more manly and this trend for all things hairy has been reflected in the world of cloth.

If a relaxing wet shave with hot towels is cashmere, then heavy stubble, or a set of mutton chops is Harris Tweed.

To qualify as genuine Harris Tweed, the cloth must be hand-woven (or warped) by islanders at their homes in the Outer Hebrides of Scotland. Weavers are self-employed and can work for any of the three mills who spin and dye the woollen yarn from which the fabric is made.

The fabric is then finished (cleaned and made stable) and stamped with the official Orb Mark trademark as a seal of its authenticity. 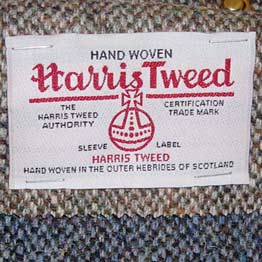 Designers such as Paul Smith, House of Holland and Vivienne Westwood are huge fans. To give you an idea of its popularity, production has soared from four hundred and fifty thousand metres in 2009 to over one million metres in 2012.

The picture below is of Lee Price in his Michelsberg wedding suit. He’s worked for Vivienne Westwood for twenty years and they supplied the Harris Tweed cloth (woven exclusively for Westwood) and we did the rest. 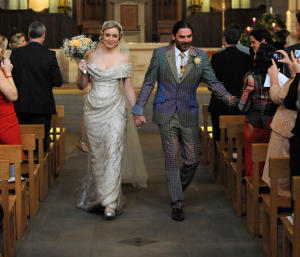 Vivienne has got to be one of my favourite designers, and like herself I enjoy working with tartans. I’m currently making a three piece suit for a customer in ‘Buchanan OC’ that will knock the balls off a mighty elephant.

‘Black Watch’ in particular is all the rage at the moment. Here’s Sam, from Church’s shoes in Leeds with a pair of Michelsberg ‘och-aye-the-noos,’ and below that is a shot from Valentino’s latest Autumn / Winter collection. 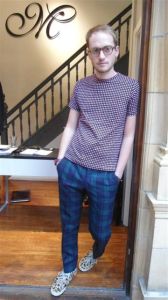 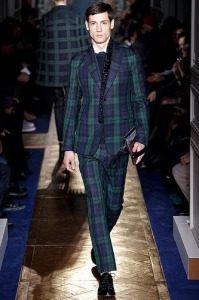 Whilst caber-country is the obvious place to go in search of tweed and tartan, ten minutes walk from my home in Otley, West Yorkshire, is Marton Mills. Introducing Duncan Watts, their Chairman, and Hannah Slater, their designer. 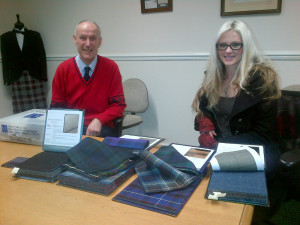 The yarn comes from M.B. Appleton in Bradford and the cloth is finished at Roberts Dyers in Keighley which they part own with the SIL group.

They also offer a personal bespoke design service and will produce as little as thirteen metres of cloth which is just about enough for six blazers.

So, if there’s a gang of chaps out there who want to cut a dash in Michelsberg blazers made-up in their own bespoke tartan / striped fabric, these guys could be just the ticket.

In my mind the vibe would be ‘Reservoir Dogs’ meets ‘Three-men-in-a-boat.’ A martini soaked fusion of Ralph Lauren and Jack Wills, minus the Tarquin.

Perfect for terrorising Henley, owning it at the races, or, simply being the best dressed stag-do on the planet.