This month, I’ve been on it like Wallace and Gromit. The showroom lights of Michelsberg HQ have been burning long into the night and like Scotty in Star Trek, “I’ve giv’n her all she’s got captain, an’ I canna give her no more.”

There’s been many an evening when I’ve shut up shop, my cheeks a deep red, the vein on my temple throbbing like an electric eel on steroids. It’s been a mental month and for that I’m extremely grateful.

That said, all work and no play….so last week my wife and I (sans kids) headed down to Devon for some ‘us’ time. We set off at the crack of dawn and by midday I was sporting my favourite threads, a “C Skins” 5/3mm wetsuit.

Surfing is, and will always be, a huge part of my life. Just sitting in the ocean, I can feel the negative energy seeping out of my system, washed away by the cleansing waters of the Atlantic. After just a few waves, I’m giggling and grinning like a five year old. Mother Nature can be a cruel mistress but this time I got lucky. Blue skies, a clean two foot swell and the smell of salt in my nose. Heavenly. Utterly wonderful.

The picture below is of Saunton Sands, the spiritual home of Michelsberg Tailoring. To quote William Wordsworth, “Earth has nothing to show more fair. Dull would he be of soul who could pass by a sight so touching in its majesty.” 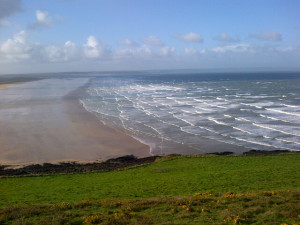 I returned fully refuelled and ready to rock and since then it’s been full steam ahead. We’ve delivered some absolute belters, many of which can been seen on my Facebook Page, and in amongst the fittings and day to day running of the business there’s been some tasty treats along the way.

Last week Matthew Simpson, Sales Director of John Fosters, took me out for lunch and here we are at Yo! Sushi in Harvey Nichols. 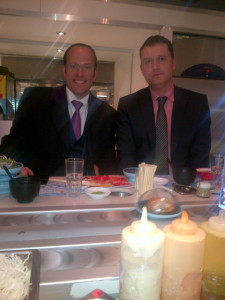 He doesn’t look happy because I’d just told him he was paying the bill! Matthew is the consummate Sales Professional – he’s proactive, efficient, a man of discretion and over the years we’ve built up an excellent working relationship. I love their cloth and my last four work suits have been made-up in their Super 120’s with Cashmere quality.

When it comes to Yorkshire mills, you’ll find none finer and my links to them are particularly close. One of my best friend’s father, used to run the business and a very close friend of my parents was a past Director. Now owned by the SIL Group they’ve been going since 1819 and have legendary status in Japan. 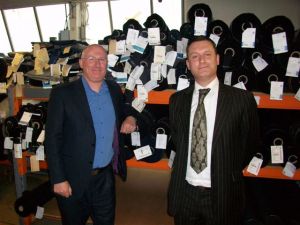 Matthew and David Gallimore (Managing Director), pictured above, are very much the driving force behind the brand and spend much of their time travelling and promoting their wares in the Middle East, Asia, and US.

As far as textile businesses go, I think they are incredibly progressive and have recently launched their ‘Escorial’ Bunch. I’ve blogged about Escorial Sheep in a previous post, a very rare, blue-blooded animal, that given half the chance, would summer in Mustique and dance badly in Chelsea nightclubs.

Their fibres are particularly ‘curly’ which provides a natural stretch and crease resistance to the cloth they produce. It feels divine and is, in Matthew’s words, ‘unapologetically expensive.’

Next month looks set to be just as full-on. It’s wedding season, suits for the races, blazers for summer parties, evening wear for cruises and that means more graft for yours truly. That said, there is a week’s holiday in Portugal coming up with my family and you’ll never guess what? There just happens to be a couple of cracking surfing beaches round the corner… 😉