Out for lunch with a customer last Friday, I felt the sun’s warmth on my cheek for the first time in ages. The restaurant was buzzing, people were smiling and one duck pappardelle later I left, ready to cast the dark, dank, cloak of winter from my shoulders.

From a cloth point of view, the mill owners of Yorkshire are feeling frisky and have well and truly declared that Spring is in the air. They’ve just sent me their new bunches which have more kick than a lamb running from the butcher. 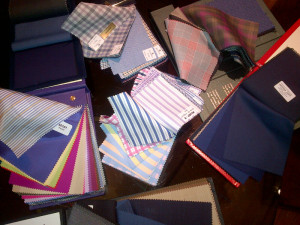 Every cloth has a story to tell. I recently showed a customer a purple chalk-stripe flannel from Holland & Sherry I was thinking of having made up into my next suit. He grinned and said, “if I were you, I’d go for something a little more Catholic.” Brilliant.

If textiles were religious, then these fabrics would be sparkly-eyed happy clappers, banging their tambourines, full of hope, joy and positivity.

Scabal’s ‘San Remo’ bunch smacks of jazz on La terrazza, the whiff of a Cohiba cigar and dark eyed Latin beauties. There’s a lightweight jacketing bunch in wool and silk from Dormeuil, put on earth to be driven ‘Italian Job Style,’ in an e-type jag down the winding roads of the Amalfi coast.

I’ve just taken an order for a suit, in a petrol blue summer kid mohair from William Halstead’s. It’s destination, Vegas. The natural sheen and lustre deserve nothing less than a stretch Cadillac, chilled champagne and some very naughty behaviour.

All in all, they ooze and bubble with colour and optimism – a preview of long summer nights and the good times ahead.

I mentioned last month that as well as our new bespoke full canvas offering, I had more news to tell and indeed that’s the case.

For the past two years I’ve been a bit like the man from Delmonte, searching for other tailors to work with to offer my customers something a little bit different. I’ve been to menswear shows all over Europe and had trial garments made by work-rooms in Portugal, Italy, Eastern Europe, Mauritius and China.

Our current half canvas British bespoke offering creates an imposing silhouette with a strong, highly defined shoulder line. The waist is suppressed and the chest has a swell and thrust matched only by that of a strutting peacock. It’s everything that you’d expect from an English tailors and like the bobby dazzler below, I love it. 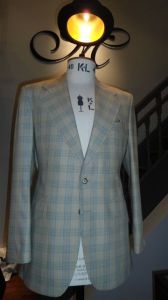 That said, I do have a huge respect for Italian tailoring. As a young thrusting executive in London for many years, I used to buy off-the-peg suits from Zegna and Armani. On a trip to Rome, I remember buying a black two piece suit from Valentino on the Via Condotti. When I left the shop, I felt like I’d ‘made it.’ 🙂

But it was a recent trip to Pitti Uomo in Florence that really made me stop and look at the Italian way of doing things.

It’s been said, the best dressed Englishman is an Italian, and to be fair, Italian men do know how to dress. Achieving La Bella Figura is in their blood.

Whilst there are differences between Italian tailoring houses, I think it’s fair to say their way of building a suit is much more unstructured and provides a more relaxed alternative. Jackets are often half-lined, with little or even no wadding in the shoulders.

So, after putting a number of firms through their paces, I finally jumped into my helicopter and said ‘Yes.’ For the last 6 months I have been trialing my new Italian inspired made-to-measure offering with considerable success. I’ve delivered over twenty suits, one of which is pictured below. 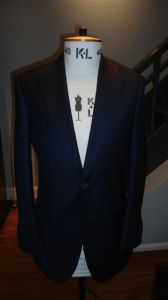 The soft, more rounded shoulders are typical of what you’d expect from many Italian companies but there is in fact some padding used. A true ‘Neapolitan’ shoulder has NO padding but I think the desired effect has been achieved.

The construction is half canvas with fused fronts and comes in at a similar price point to the British Bespoke, starting at £700. It’s great for people who prefer unlined jackets, or very light fabrics. The process is quicker than British bespoke, as there is no need for two full fittings, and a garment can be made to a ‘straight finish’ in five weeks.

So I now have three strings to my tailoring bow. A half canvas British Bespoke and Italian inspired made-to-measure line coming in at £700, and a top of the tree, full canvas garment, pad stitched by hand, with hand sewn button holes coming in at £2000 upwards.

It goes without saying there are other fine tailoring workshops on my radar that require investigation. All this market reaseach naturally means further additions to the Michelsberg wardrobe and that’s never a bad thing. 😉