Another year, another dollar, and after what has been a highly indulgent Christmas, it seems another chin.

For ten gloriously gluttonous days I put my feet up, except for an enjoyable trip to Helmsley for a photo-shoot with two new customers.

Introducing brothers George and James Craig, from the band, ‘One Night Only.’ 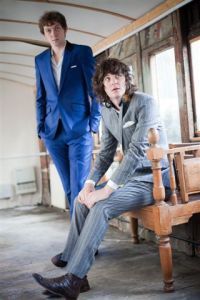 They knocked on my door after spotting the particularly dandified double-breasted waistcoat in scarlet doeskin I’d made for Jack at Jeffery-West shoes.

The clincher was when he explained to them that a button was missing ‘because a girl had ripped it off.’ Priceless. PR from the gods.

Beers were drunk, ideas exchanged and I think the results speak for themselves.

George, the lead singer, went for a very fitted, single-breasted number with slim notch lapels and cut-away fronts.I love the flash of lining on the cuffs and the bright yellow melton under-collar. 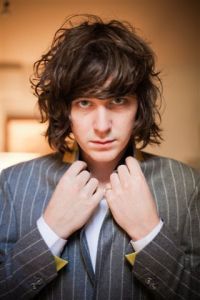 James, the drummer, went for an electric blue, silky Super 130’s cloth from Dormeuil, with brown velvet top-collar and jets. There’s a brilliant white lining with flashes of velvet in the cuff vents and cloth covered buttons.

These guys are going places, quite literally. George is currently playing with the rest of the band in Rio, whilst James is in Vegas as best man for a mate’s wedding.

Dealing with them has been a genuine pleasure and the fact that my threads are tearing it up in Brazil and Sin City, puts a big fat smile on my face.

AND NOW FOR SOME BIG NEWS.

Never happy standing still and doing the same old thing, I am thrilled, delighted, excited and buzzing to announce a new line to the Michelsberg armoury.

A first fitting of which is shown below. 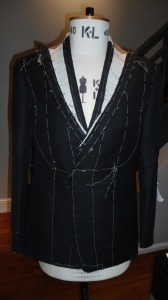 Like an Aston Martin, it’s beautiful to look at and will turn heads, but when it comes to performance and handling it’s what’s underneath the bonnet that counts. 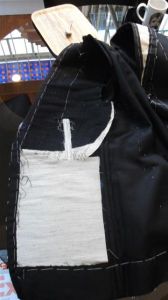 The construction under the cloth has a number of layers. First the body canvas (which goes right down to the bottom of the coat), then the chest canvas, or hair-cloth, and finally a layer of domette (it looks a bit like felt) to protect the wearer from the prickly canvas underneath.

These three layers are then pad stitched (sewn) together and crucially shaped and moulded by hand to create a soft armour with which to flatter and caress the wearer’s body.

The lapels are hand-padded which means the cloth and a layer of silecia (a bit like linen) is folded and sewn together by hand to achieve a beautiful ‘roll,’ rather than the flat lapels you get with many off-the-peg garments.

This folks, is as good as it gets. A herd of sartorially astute, stampeding wilder beast would stop dead in their tracks and gasp at the mind-blowing quality of such workmanship.

The clip below gives you a quick peek at the V12, 48 Valve, work of art that lurks beneath Huddersfield’s finest.

There’s about sixty hours of hand-sewing involved which provides a wonderfully artisan feel to the garment. As well as the time spent in building the internal structure of the coat, it’s the time invested in the finishing that takes things to another level.

The edges of the fronts, pocket flaps, cuff vents and out-breast welt are all prick-stitched by hand. The lining is hand-felled (sewn) all the way round and eased into the armholes. Finally, the lapel hole and every button hole is meticulously hand sewn in silk twist thread as can be seen in the footage below.

It’s what you’d expect if you went to the blue blooded houses on Savile Row, and that’s been my goal from the start. To be able to offer my customers a world-class service with a product to match. The real deal. The best of the best.

This January has got off to a belting start and I’ve got more news to reveal in my next blog. So until then it’s back to my pins and chalk and hopefully a few trips to the David Lloyd health club to try and get that chin sorted out.