It’s four hours before my flight home and I’m closeted in the cigar bar of the JC Mandarin Hotel, a bottle of Tsing Tao beer in my left hand, a knock off Montblanc pen in my right, trying to find words that do justice to the incredible city that is Shanghai. 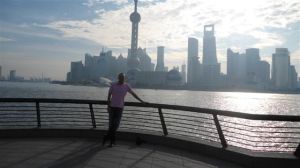 Here for a mixture of business and pleasure, it’s blown my mind. Whilst Europe shivers from an ill wind of debt, China sunbathes confidently in a Gucci G-string.

What a city. It’s bold, brassy, bristles with energy, has the swagger of John Wayne and more grunt than Monica Seles. I was staying just off the Nanjing Road, their equivalent of Bond Street.

Perched by the fountains opposite Plaza 66 (home to some of the flashiest frock and clock shops on the planet) I watched the world go by. It’s bonkers. Utter Madness. Taxis terrorise bag laden shoppers like angry wasps and the highway code boils down to survival of the fittest.

I was told I had to visit the Alfred Dunhill store on the Huai Hai Road. Owned by the Richemont group it’s one of the coolest set-ups I’ve come across. You wander down a discreet little path to arrive in front of two 1920s neoclassical style villas. The one on the left is Dunhill, the right, Vacheron Constantin, with a private members club above. 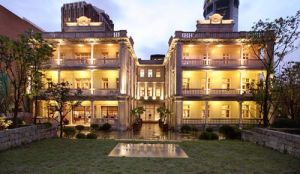 There’s a covered walkway between the two, a quaint little garden, rattan chairs and parasols. It’s like being blasted back to the days of the British Raj, a place for sipping a Gin & Tonic and then heading out to bag a tiger after lunch.

I shopped till I dropped, ate duck’s tongue and hairy crab, hit ‘The Bund’ and gawped at the Skyline, partied at the Mint Club with the Editor of Twist Magazine who was over for ‘Intertextile’, and had a cracking night out with the Sales Director of John Fosters, who was visiting customers in Asia.

It wasn’t all picnics and lashings of Ginger beer. I visited a trade show and hooked up with some London based tailors who are at the top of their game offering truly outstanding garments. Without being too melodramatic (not like me at all) they were pretty inspirational and have made me even more determined to keep driving and get better at what we do. A plan is beginning to form in my mind but I’m going to keep my powder dry for now… 😉

I checked out the Shiliu Puhong Qixiang Cloth Fabric Markets, where the quality was variable, and popped in to see a couple of tailors who’ve been recommended to me. One, The Humsuit Company, the other, Dave’s Custom Tailoring. Here I am below with one of his coat makers. 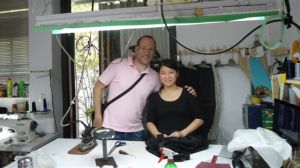 Now I know the latter sounds a bit like one of Del boy’s mates but the quality seemed excellent. The lapels and interlinings (canvas, silesia, domette) are hand-padded, meaning they are rolled, shaped and sewn into place by hand, and the button holes made by hand. 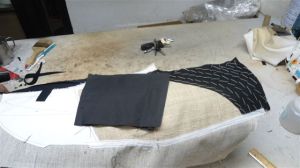 It’s been a full on month. As well as the day job and my trip, I’ve been doing the preparations for the Michelsberg Debating Competition which kicks off again at the end of November. All the big legal firms in Yorkshire have signed up with the final on the 5th December.

So it’s foot down now until the end of the year. No more jollies, no more trips to foreign shores, just cracking on with the daily grind and putting things in place for the next chapter in my company’s development.

Wishing you all the best in the run up to Christmas and remember, a Michelsberg brolly, silk tie or bespoke shirt would make someone a lovely prezzie 🙂