Mr Miyagi and I both understand the importance of balance. To quote the great man, “Balance is key. Balance good, karate good. Everything good.”

His words of wisdom are just as important to the craft of tailoring as they were to the floppy haired Daniel LaRusso, who broke a thousand pre pubescent hearts in the 1980’s as he kicked his way to victory in the film “Karate Kid.” 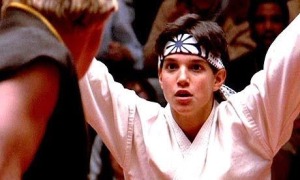 That said, you won’t find me doing the crane, waxing cars, or having a pop at helpless insects with chopsticks. Balance, as far as I’m concerned is all about getting a coat to hang perfectly from the shoulders.

A bespoke jacket should resemble a tranquil lagoon without a ripple or crease anywhere on the surface of the cloth. When viewed from the side, the bottom of the coat should point slightly downwards and when viewed from the front, the lapels should sit close to the chest and the fronts fall away gently after the point of buttoning.

If we all had perfect posture and the physique of a Dolce & Gabbana underwear model then there’s a chance ‘the lagoon’ might be achieved with an off-the-pegger. In reality, most of us have to contend with all manner of things that Mother nature has thrown at us, as well as the self-inflicted bumps and lumps that have appeared due to too many long lunches and getting to know Auntie Stella.

It is these imperfections, often called ‘figurations’ in the trade, that upset the balance of a coat and must be identified during the measuring stage and then provided for when the garment is cut.

They come in many guises – an erect (upright) or stooped posture, shoulders that slope severely, or, where one ‘drops,'(slopes) lower than the other. A sway stance whereby a customer stands with his hips forward, a prominent chest, big thighs, skinny legs, moobs, muffin-tops, the list is endless..

Over the years I’ve probably spent more time checking out men’s bodies than Graham Norton and never really switch off my tailoring radar. For example check out the picture below. 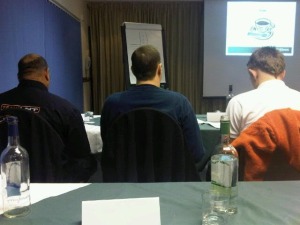 Yesterday, I attended a Speed Awareness Course after being caught on camera speeding. After only two minutes in the conference room, I’d spotted that the bloke in front of me had square shoulders (meaning they hardly slope at all). Had he been wearing an off the peg jacket, chances are a horizontal crease would be lurking just under the back of the collar. In fact you can see it happening on his jumper.

The cure for this would be to do a ‘square back neck’ in the cutting room. Rather than go into what this physically means, all I’ll say is that there are many wonderful things that can be done with a pair of shears and some wadding to hide away our little faults and emphasise the good stuff.

This desire to flatter the figure and achieve balance continues throughout the fitting stage where small notches of white thread are sewn into the garment (as can be seen below) to act a bit like mini spirit-levels so we can make sure the garment isn’t lopsided and if so, have a marker with which to make adjustments. 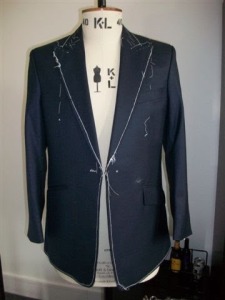 But at the end of the day we can’t achieve miracles. Someone with a fifty inch tummy is never going to look like Leonardo DiCaprio in one of our suits no matter what we do. As one of my coat-makers once said, “James, I’m a tailor, not a bloody surgeon.” Spoken like a true Yorkshireman.