I’m halfway through Stephen Fry’s second Autobiography and it’s an absolute gem. When it comes to penning polished prose, he’s a master and it’s a joy to see our beautiful language used with such fondness and aplomb.

As an actor, he was marvellous as the towering, mustachioed ‘Melchett’ in Blackadder – perhaps the best sitcom ever? – and I also enjoyed his performance as ‘Jeeves,’ the infinitely wise, dexterous and diplomatic valet in ‘Jeeves & Wooster.’

Whilst Blackadder simply reduced me to tears, with Jeeves & Wooster, it was all about the clothes and the lifestyle. 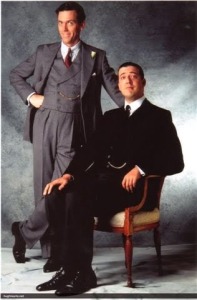 Set in the 1930’s, it’s focus was on Bertie Wooster, a spoilt, but rather endearing member of the idle rich. His day would begin propped up in bed with tea and toast, whilst Jeeves would draw a bath and help select appropriate dress for the day’s high jinx.

All very well but let’s get focus on the really good stuff – his wardrobe. Dashing, dandified, and for the most part effortlessly elegant. To me it echoes the more positive traits of his character: unrelentingly optimistic, inwardly confident with an air of jaunty nonchalance about it all. 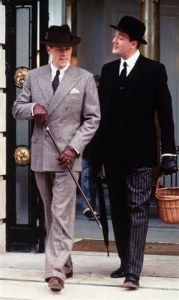 The 1930’s was very much about making men look masculine and achieving a ‘V’ shaped silhouette. Shoulders were padded with wadding to make them look as broad as possible, emphasised further with the use of peak lapels, chests built up with heavy canvas, waists nipped in and the sleeves tapered slightly to the wrist.

Trousers were high waisted ‘a la Simon Cowell’, often with two forward pleats and turn-ups. Turn-ups? I hear you gasp. Trust me – in a years time they’ll be everywhere – Pitti Uomo in Florence (the big menswear show) was recently full of them.

It was a golden period for double-breasted suits, which I adore, despite the inconvenience of having to keep them buttoned up all the time. Waistcoats were a must, often with lapels and boating blazers and Plus Fours were also very common.

This macho look was taken to even dizzier heights by gangsters of the time, such as Capone and Bugsy Siegel, who combined the above with bold and broader pin and chalk stripes, wider trousers, and of course, a Fedora and cigar. 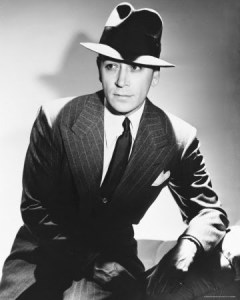 A discussion about the 1930’s wouldn’t be complete without mentioning a prominent London tailor of the time, Frederick Scholte, who developed what became known as the ‘London Cut,’ or, ‘Drape Cut,’ favoured by the likes of Cary Grant.

Without getting into too much technical detail, he, like the Italians today, preferred ‘soft-tailoring,’ using less construction in a garment. He also incorporated extra material around the shoulders as he felt it made men look slimmer. An extreme of this can be seen in the image below of ‘Zoot’ suits, which I think you’ll agree should never be allowed to come back to haunt us. 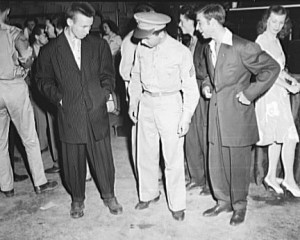 Yes, the 1930’s was a good decade to have fun, and if the dark nights, cold winds and Christmas credit card bills are weighing you down, then a dose of Jeeves and Wooster is just the ticket.

In fact, I’ve gone one better and treated myself to a ‘Bertie Special’ – a new suit complete with double breasted waistcoat, washed down with a Vodka Martini. Pip Pip! 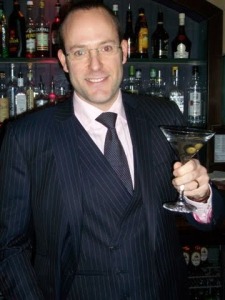