Hats off to Yorkshire’s legal eagles who yesterday stuck two fingers up at the weather and bravely stomped through the snow to take part in the grand final of the Michelsberg Debating Competition.

After canapés and a much needed glass of mulled wine, competitors and their supporters settled down to do battle, the motion for the evening, “This House Believes there must always be the poor.”

Judges for the evening’s festivities included Andrew Stubbs QC from St Pauls barristers chambers, Khadim Al’ Hassan, from No 6 barristers Chambers, Paul Aber from College of Law York (sporting the most magnificent moustache for ‘Mo’vember), and myself.

What came next was everything I’d hoped for. People spoke with confidence, humour, passion, intelligence and conviction, vehemently challenging each others arguments throughout the proceedings. I have nothing but respect for people who are willing to stand up in front of an audience with minimal preparation and come under fire from some of the sharpest legal minds in the business.

As a debater you need to be able to think on your feet, roll with the punches, get the crowd on side and shoot down your competitors. After the dust had settled, the deliberations began and it didn’t take long for us to unanimously decide that Adam Roney of Eversheds was ‘best in show’.

Here he is pictured below, second from the left, with judges Khadim, myself, Paul and Andrew also in the line up. His prize, a Michelsberg bespoke suit for his troubles, well worth a few chillblaines and a increase in blood pressure. 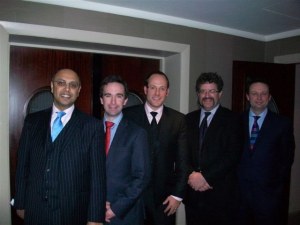 Best team was Adrian Mansbridge and Claire Farrell of DWF, pictured below. They also did exceptionally well in their qualifying round, where teams came under extreme pressure from judge Andrew Haslam of St Pauls Chambers, ‘slugger extrordinaire,’ who has iron hands, elegantly wrapped in a pair of velvet gloves. 🙂 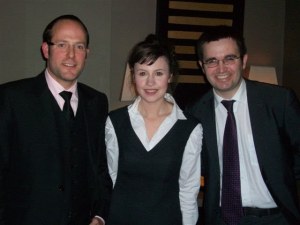 It was agreed by all that the event had been a real success allowing lawyers in different firms to get together, have fun and flex their little grey cells. I will be repeating it on an annual basis and am looking at turning it into a National competition (including ‘War of the Roses,’ perhaps, North Vs South).

Thanks to all of you in the participating firms who helped to make this happen and here’s to the next one.