The days of grilled fish and a lingering G’n’T after work are gone. Winter is upon us and it’s time to pull up the drawbridge, uncork the red, slam a pie in the oven and welcome back the captains of crap TV into out homes. May I propose a toast to Messers Sugar, Forsythe, Michel Roux Jnr, and the modern day Cowley that is Sir Harry Pearce.

It’s also a time to sort out the wardrobe. Light grey suits in floaty nine ounce cloths must give way to heavier twelve ounce weights in darker tones, with Flannels, Corduroy, Moleskin and Tweeds getting their turn in the spotlight.

As far as business goes, overcoats and winter jackets are the order of the day, and we are up to our eyes in dinner suits for forthcoming award ceremonies, balls, dinners, and Christmas parties.

But every now and then we get the chance to do something different. Here I am below with Richard, a new customer who shares my taste in Jeffery West shoes and sharply tailored bespoke suits. 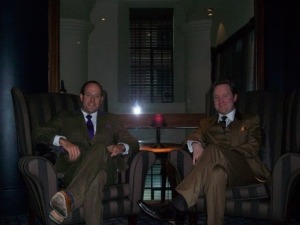 He’s just taken delivery of a rather dashing three piece to be christened at York races. It’s made up in a modern, golden-brown herringbone design incorporating a striking orange over-check with chocolate brown velvet collar and jetted pockets.

It also incorporates those little extras that might be frowned upon by traditionalists but warm the very cockles of my heart. The devil, as they say, is in the detail, and life wold be dull without a little misbehaviour. Like many men, I’m a fan of the ‘working cuff,’ whereby the button holes are cut and sometimes sewn by hand, allowing the wearer to undo the cuff buttons.

I think they hark back to the days when it was frowned upon if a gentlemen removed his jacket in public. A well healed chap at the opera, could pop into the gents at half-time, undo his cuffs, roll back his sleeves, wash his hands and head back out for a glass of fizz without, heaven forbid, showing his shirt.

Wrongly, it’s become a mark of ‘bespoke’ and I have seen them incorporated in ‘off-the-peggers.’ Whilst it is never going to be as important as other key areas of construction, I think it’s a nice touch like the one pictured below, particularly when combined with a flash of velvet, or lining, under the vent where the buttons sit.

As you can see, it’s rather subtle but will catch the eye of a fine filly when you open the car door of your Aston, or wink at the lesser dressed guy in front of you at the boardroom table when you sign that meaty contract. 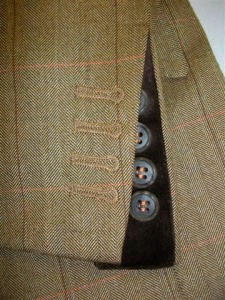 And then there is the humble ‘flower loop’ like the one pictured below – it’s a small loop of thread that is sewn behind the lapel hole of a coat. It allows the wearer to simply pop a flower through his button hole and neatly tuck the stem away under the loop, rather than fiddle around with pins and clips. Can you spot the “Made in England” label? Something of a rarity these days. 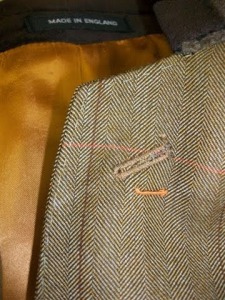 Like with the working cuffs, I’ve seen them on ready-to-wear garments but it does take time to make one, particularly when, like ours, it is done by hand and can be seen in the following video:

Final touches are the addition of a metallic copper lining and the Michelsberg badge of honour, that enriches the wardrobes of many and strikes fear into the hearts of lesser tailoring companies. 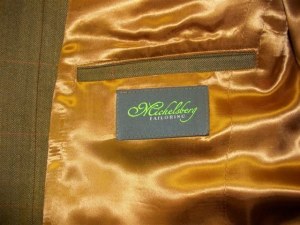 There’s no escaping the fact that we’ve got some tough months ahead. It’s going to get cold, damp, with less daylight hours than a Chilean miner, but we’ve got to stay positive. So here’s to cosy nights in front of the box and perhaps something in cashmere to keep the winter chills at bay.