Last week I died and went to sartorial heaven. The angels spoke in Italian, sipped espressos and strutted around like peacocks, showcasing some of the finest tailoring on the planet.

I’d decided to make the pilgrimage to Florence to take part in the biggest menswear show in Europe – ‘Pitti Uomo.’

For lovers of divine threads this truly is the land of milk and honey. It’s here where the big boys like Kiton, Brioni, Belvest, and D’Avenza come to oil up and flex their garment making muscles in front of an international audience of buyers, agents and the media.

When it comes to looking good, the Italians rule the roost. It’s in their blood. I remember watching two guys in front of a shop in Rome talking about a pair of shoes as if they were discussing a beautiful woman.

That passion, that confidence to go forth and show the world whose your daddy is the engine behind a tailoring and textile industry that few other countries can match.

So, not wanting to let the side down, I popped on my three piece and panama bowler hat and threw myself into the baying throng of air kissing Giuseppes in search of new contacts. 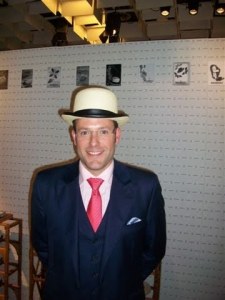 Also along for the ride was a young lady who is now working with me to design our first ready-to-wear collection. Introducing Miss Louise Winestone. 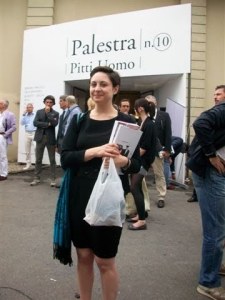 One of the key differences between Italian and English tailoring is the construction and silhouette. Italian tailors tends to use much lighter canvases, with garments having a much softer, more natural shoulder line, with more drape, using very little wadding in the shoulders and the chest. An example is shown below. 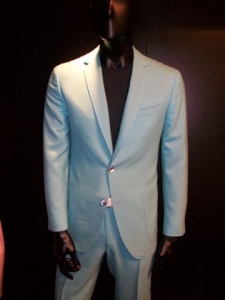 Whereas, English tailors tend to prefer a more ‘constructed garment’, with heavier canvas, a more imposing shoulder line and clearly defined chest, nipped into the waist such as this little number below. 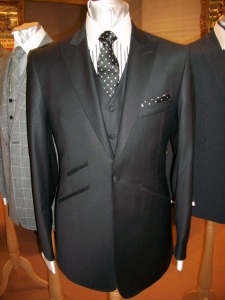 As far as I’m concerned, they both have their merits.

Personally, when I wear a suit, I like to feel it on me and so like the heavier construction.

Put on an English jacket and it says, “Right fella. We’re ready to rock. Let the games begin.” With an Italian suit, it’s like you are having a massage. It puts it’s arm round you and says, “Buona sera. Let’s sit down in the sun, drink limoncello and watch the pretty girls go by.”

Different schools of thought. Both worth attending.

I tried suits on by Kiton which can retail at well over five grand and met with the most highly regarded names in Italian Menswear. Most are still run as family businesses and nearly all of them have ladies who are charming and rather attractive, such as Barbara from Ravazzolo in Vicenza. 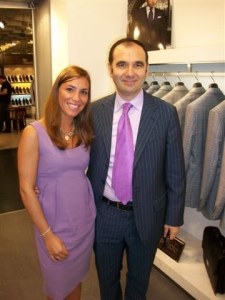 I met with guys from Savile Row such as Richard Anderson and his partner Brian Lishak, ate the best veal I’ve ever tasted, and ogled at some of the most beautiful garments I’ve ever seen. Inspiring, exhilarating and utterly knackering.

As I left the exhibition for the last time, I stumbled across Mr. Yukio Akamini outside the main hall. He’s a legend in Japan and known throughout the world for his knowledge of textiles, tailoring and ability to open doors. 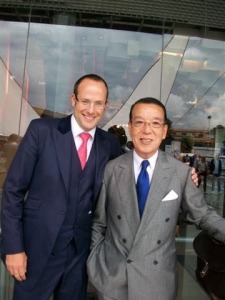 As I collapsed into my seat on Ryan Airs finest, the land of ‘sogni d’oro’ fell upon me. Graze Firenze. I’ll be back.