I’m buzzing. Last night was the the inaugural “Michelsberg Debating Competition” and if I say so myself, it rocked.

After running internal competitions to select their best debaters, the finalists congregated at the Malmaison Hotel in Leeds to do battle before an audience and an esteemed panel of judges.

The motion was simple – “This House Believes in Style over Substance.”

Whilst the contestants had fifteen minutes to prepare, the rest of us munched canapes and tucked into the booze before settling down to let the games begin.

What followed was everything I’d hoped for and I have nothing but admiration for all the participants. To stand up on your back legs, with minimal preparation, under the glare of a TV camera’s lights, whilst your opposition is doing everything it can to make you stumble and look like an idiot, takes confidence, a cool head, quick thinking and an impressive pair of cojones.

The debate was recorded and can be viewed if you click here.

The best speaker was Edward Duncan-Smith (pictured below) from College of Law York who received the prize of a three piece bespoke suit. Not bad for a nights work. 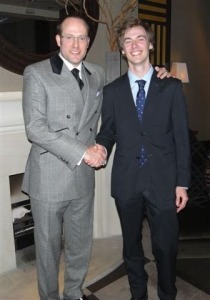 Best team was College of Law York, which also fielded Rupert Oldham-Reid. They were in support of the motion and as I might have guessed, style won the day! Runners up were Leeds Metropolitan represented by Tom Royston and Stephen Dudley.

So what did I get out of it? Well PR aside, it was great fun and an incredible rush to make something happen and see people enjoying themselves. The plan is to run a regional heat in the South and then host the Grand Final. North versus South. Bring it on!