Another year begins and it’s started off in style. 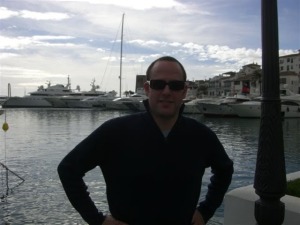 Taken there as a child on holiday, I remember watching in awe as wannabees with mullets cruised along the port in Porches, peroxide blondes by their side with a-ha’s “Take on Me” blaring out of the radio.

Not much has changed. It’s still as flashy as a Russian mistresses ring finger and a place where botox and cash rule the roost. Slightly tacky? Yes, but sipping a cold beer with the sun on your shoulders, watching the world go by against a backdrop of mega-yachts and sparkling blue water is a tonic that will revive the most weary of tailors.

All that spending power attracts the luxury retailers and so a stroll along the front was the perfect place for me to check out the competition. And who better to kit out the newly wedged than Tom Ford. 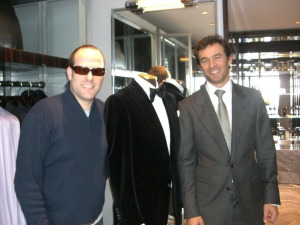 Here I am with Laurent Lapied who runs the Puerto Banus outpost. It’s an air-conditioned bubble of velvet, steel and mirrors that showcased the threads quite beautifully.

Tom is a sharp cookie with a degree in architecture and when it comes to marketing and attention to detail, he is up there with the best of them. Lauded as the saviour of Gucci he turned a failing brand into an operation valued at $4 billion.

I tried on a two thousand euro off-the-pegger like the one Laurent was wearing and it felt fabulous.

Made in Italy the construction is very soft and I loved the roped shoulders and peaked lapels. I was told it’s made entirely by hand and was very impressed by the way the collar had been attached with a fine mesh and the handmade button holes were finished beautifully.

The highlight was a dinner jacket in a brocade silk with velvet detail that was simply stunning – it even warranted it’s own crystal display case and swirly patterned artwork behind it. Perhaps a tribute to Tom’s disco days at the infamous Studio 54 nightclub in New York?

Tom has thrown down the gauntlet and it’s landed with a serious thump. When it comes to merchandising I could certainly learn a thing or two and so retired to my sun-bed to reflect and plan my continued quest for world domination.