Nobody does it better..

I remember it like it was yesterday. I’d just finished watching the Dukes of Hazard on the telly and my Father came into the lounge and told me a Bond film was about to start and I’d enjoy it. Understatement at its finest.

Watching your first Bondy is as much of a rite of passage into the world of manhood as loosing your virginity, except it lasts a bit longer. I popped my 007 cherry to ‘Goldfinger’. 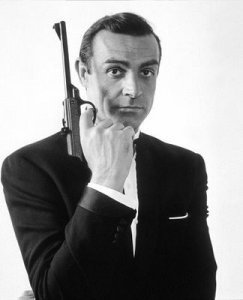 Sean Connery in my opinion is, and always will be, the ultimate Bond. That deep Scottish bur, the way he moved like a cat, nonchalant with confidence oozing from every pore.

Here was an Alpha male who was as smooth as the mink glove in his overnight bag and twice as hairy. An Aston Martin DB5 and Pussy Galore on his arm was always going to help, but it was the cut of his grey three piece suit that nailed it. 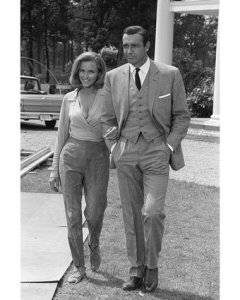 Check out the line of the shoulders – masculine, defined, wonderfully imposing. Armani might be famous for ‘ripping the stuffing’ out of English tailoring but here is an old-school English constructed garment at its finest.

His tailor was Anthony Sinclair, who pioneered “The Conduit Cut” after the address of his Mayfair studio – slimline, single-breasted, two-buttoned. I try to incorporate many of these Conneresque features into my suits – narrower shoulders, slimmer sleeves, skinny lapels, ticket pockets and side vents.

I’m also a big fan of the two ‘forward’ pleats on the trousers, which is very British and favoured by the chaps on the Row. This is as opposed to ‘reverse’ pleats which are preferred by the Italians.

Connery played Bond with a steely intensity and his suits, in subtle shades of grey, blue and brown were understated and reflected his serious, business-like approach to saving the world.

This is in sharp contrast to Roger Moore who brought a lighter, laid back approach to the debonair 007. Polished, refined, effortlessly charming, he had the British thing down pat, but the raised eye-brow, bouffant hair, shocking one-liners and silk cravats made him as menacing as a Chiwawa and as camp as Christmas. 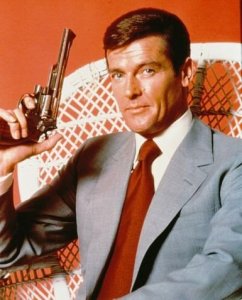 Roger Moore’s tailor for his Bond films was Doug Hayward in Mount Street, Mayfair, who sadly died this year. He was regarded by many as a genius and customers included the likes of Michael Caine, Patrick Lichfield and Michael Parkinson.

He offered them a glass of bubbles when they arrived, was great fun, a good listener and like all good tailors was discreet. A working class lad made good, he deplored the stuffiness of some of the Savile Row institutions and describes his place as “relaxed, nice and easy. And besides, I get a lot of birds in.”

The Seventies was certainly not my favourite decade when it comes to matters of style. It was a time of Disco and the Bay City Rollers. Platform shoes, kaftans and kipper-ties were worm with impunity, so the odds of coming out of it with your sartorial dignity intact were always going to be stacked against you.

I think Roger managed to keep his head above water, and even cut quite a dash in the number below – the ‘superfly’ bell-bottom trousers, wide lapels, flared waist and slightly raised shoulders have a touch of the ‘pimp daddy’ about them. 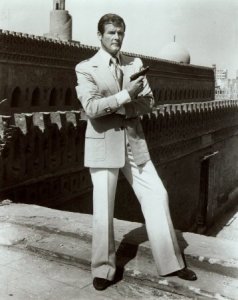 In fact, I have a friend in the South who actually commissioned a Roger Moore style light-blue Safari-Suit to be worn on a night out in Leeds, after a day of drinking and watching the cricket with the lads at Headingley.

And so to Mr. Brosnan. 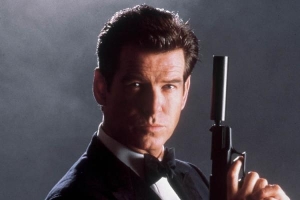 Excessive pouting aside, I thought Piers did quite a good job of Bond. Quite smooth, well spoken, could probably take a punch and was no doubt a hit with the ladies the world over.

Of all the Bonds, I think a suit actually suited him the most, whereas Connery would be more at home in a rugged cable-knit sweater, and Roger, a silk dressing gown and calf-skin slippers. Piers was born to wear a three piece, but at the end of the day, neither he, nor his chest wig, came close to matching the true might of Mr. Connery.

His suits, including the one below, were made by Brioni. It has to be said these guys in their factory in Abruzzo can give the chaps on the Row a serious run for their money. The jackets are sewn by hand and then finished off by machine, take about twenty hours to produce with an off-the-pegger costing over five thousand euros. 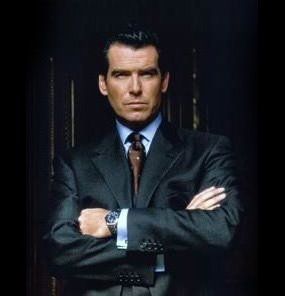 Here’s something that made me smile:

After the release of Die Another Day (2002), Piers Brosnan was approached by a man in a Dublin bar who asked to shake his hand. He complied and the man said, “That’s the closest my hand will ever get to Halle Berry’s arse.”

And finally to our current Bond, Daniel Craig. In Casino Royale, he was often in t-shirts, jeans and a leather jacket (Armani), but when a suit was called for, he was also kitted out by Brioni. 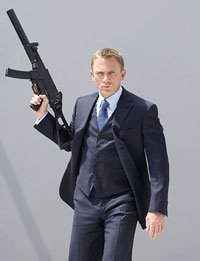 I must say I loved the film but he just wasn’t Bond. Or at least he wasn’t my Bond. The Bond with the Scottish accent who had me spellbound after I’d finished ogling Daisy Duke in those jean shorts.

He was just another Jason Bourne type character with a chest the size of two terrace houses in Barnsley, tearing it up with a multi-million pound budget and awesome production team behind him. Hard, tough, gritty, credible – yes. Suave, sophisticated, hairy – no.

I am really looking forward to Quantum of Solace. Craig is a cracking actor and I’m pleased to say his tailor (Tom Ford, former creative director of Gucci and Yves Saint Lauren) managed to find enough cloth to cover his torso, after he reportedly ruined over forty suits during its production.

I am confident if will be a block-busting, action-packed, edge of the seat, extravaganza, with perhaps a few scenes dedicated to showing us his sensitive side. And chest.

When it comes to being 007, Roger, Daniel and Piers have all done well, as have Hayward, Brioni and Ford in dressing them.

But like Michelsberg and Tailoring, when it comes to Sean Connery, nobody does it better.