For my friend Gullers, it’s the sound of a Ferrari engine. For my brother Edward, it’s a bottle of Château Latour or Penfolds Grange. We all have things in life that make our eyes sparkle and grin from ear to ear and for me it’s always been clothes.

From my silver “Miami Vice” / Don Jonhnson number at the age of ten to my first Savile row suit from Chester Barrie at twenty one, threads just simply do it for me. Can’t explain why, they just do and they always will.

No matter what your passion is in life, you can always find like minded people to share the buzz with. There is also, often a home, or, birthplace where that passion is nurtured, and held as something special, magical, almost sacred.

If writing computer-code causes peaks in your pyjamas, then you should go to Palo Alto. If it’s cooking that sets your heart on fire, then like Gordon Ramsay, you need to make that pilgrimage to France. And if it’s tailoring that flicks your switch, then I’ve only two words to say to you and that my blog reading buddies is Savile Row. 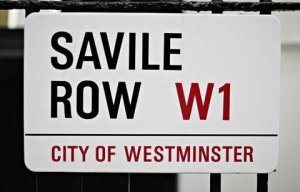 Located in Mayfair, it has been home to tailors since the early nineteenth century, who could see the value of being close to the townhouses of wealthy chaps like Beau Brummel who had developed a taste for looking good.

A stroll down this “golden mile” is truly a sight to behold yet the vibe, history and values of the players along it varies enormously. Let’s start with the the big boys, the godfathers of this Mayfair mafia – Henry Poole, Gieves & Hawkes, Dege & Skinner, Anderson & Sheppard and Huntsman.

Henry Poole, founded in 1806, is considered the founder of Savile Row. He was a legendary front man who was financed by his father and Baron de Rothschild to move in the highest of social circles and dress the great and the good. It worked and they kitted out the likes of Napoleon, Churchill, various Prince of Wales and European Royalty. Sadly, Henry was not the greatest of businessman, extended too much credit and hospitality to all and sundry and his shop nearly went under. Today, the firm is led by Angus Cundey, who spent part of his career in Yorkshire at the mill Taylor & Lodge in Huddersfield – must have been the best years of his life! Like myself he is reluctant to name his customers, but it goes without saying they include the English aristocracy, Moguls, Magnates and International Royalty.

Anderson & Sheppard, moved to the Row in 1913 led by a Swede, Per Anderson and his partner Sidney Sheppard. They are known for their “limp look,” a style of tailoring that is softer, less structured than those tailors such as Gieves & Hawkes and Dege & Skinner who come from a more military background, and this style remains today. As a firm, they are associated with dressing the legends of Hollywood, including Fred Astaire, and today many of the leading lights of the fashion world are their customers, Valentino and Tom Ford to name a few. Now based on Old Burlington Street after a fall-out with landlords their offering is purely bespoke.

Dege & Skinner went into business together in the late nineteenth century and their families have been in business together ever since. Through their respective military histories, love of equine pursuits and more importantly the acquisitions of respected firms such as Wilkinson & Son and military tailors Rogers, John Jones, they are the boys to see when it comes to getting something made-up for a weekend in the country.

Gieves & Hawkes background is in the Navy, has a string of Royal Warrants and currently resides on No.1 Savile Row – nice address I’m sure you’ll agree! It is run by Mark Henderson and I take my hat off to his team and the way they have leveraged their bespoke tailoring roots to made-to-measure, off-the-peg and accessories. Kerrching!

Huntsman came to the Row in 1919, and are often regarded as tailor to the stars. I think I am correct when I say everything is still done in-house and work is not sent out to various outworkers. They are regarded as the most expensive tailor, not necessarily a bad thing, their construction (like ours) is structured and builds up a chaps shoulders and chest, whilst emphasising the waist. Alexander McQueen trained here but it didn’t last….maybe he was a bit OTT, even by my standards!

And then we have the New Establishment, the young guns who like many of the founders of the firms above, and others such as Tommy Nutter, have achieved success through their ability as front-men. You’ve got Ozwald Boateng, Richard James, Spencer Hart and Timothy Everest. Clearly they know what they are doing when it comes to PR, marketing, building a brand and social networking. Some of their tailoring credentials are a little bit fuzzy but like myself, I consider that acceptable if you have the right people behind you and a genuine passion to delight the customer.

After Chester Barrie, Spencer Hart was the first place on the Row I visited and I can actually remember saying to Nick Hart how lucky he was to “be living the dream.” You can imagine how chuffed I am now to be running my own show – who knows, in five years time we might even be neighbours.

And then there are others who must be mentioned. Kilgour and Norton & Sons – two firms who are steeped in history and through the re-positioning of their brands and acquisition of celebrity customers like Jude Law, are now attracting younger clientele.

In SOHO, there’s John Pearse who fully embraced the excesses of the 60’s and 70’s and Mark Powell, once referred to as “the best dressed man in Town.”
Edward Sexton in Beauchamp Place kitted out Mick and Bianca Jagger in matching white suits on their wedding day, although I felt the lapels on her coat were gaping a touch. 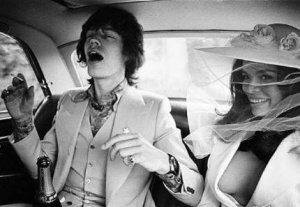 And last, but by no means least there are those who are tucked away from the bright lights of London but still have a reputation for some of the finest tailoring in the world. Thomas Mahon, of Englishcut, left Anderson & Sheppard to return to his roots in Cumbria and as ex-cutter to Price Charles has built an incredible International client base with regular trips to the US and even further afield. I bumped into Tom in Scabal on Savile Row as I was just starting out and his advice, encouragement and genuine passion for the trade has been an inspiration to me. I have made several visits to Warwick Hall to see him and the rest of his team and after a few beers in one of the local pubs recently offered to make a coat for him as a token of my thanks.

In the cold light of day, I realized what I’d done. It was a bit like asking Marco Pierre White if he’d like to swing by my place for dinner. No pressure then – yeah! That first fitting, I was sweating like a Scouser at Dixons but am thrilled to say that Tom is chuffed to bits with his Michelsberg special (pictured below). Thanks must go to the craftsmen and ladies behind me in Yorkshire who actually put the thing together. 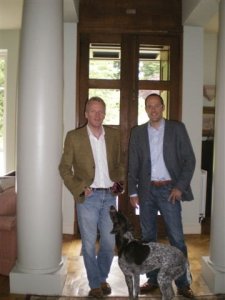 So to all you guy’s and girls who are tucked away in basements, attics, sheds, and workrooms throughout the country, working wonders with needle, thread and sewing machines, I’d like to raise a toast to you all who so often don’t get (and don’t want) the acknowledgement and praise you deserve.

Savile Row would be nothing without you.