Car crash telly it may be, but the dreadful people, their political manoeuvrings, the back-stabbing and fabulous editing have made it for me truly compulsive viewing.

Last nights ‘firing’ of Raef Bjayou is further testament to the sad truth that the days when gentlemanly behaviour was held in high regard by others is almost a thing of the past.

Initially I took Raef as a jumped up little squirt but from the beginning it was clear that here was a man who knew how to dress.

Hardy Amies said ” a man should look as if he had bought his clothes with intelligence, put them on with care and then forgotten all about them” and in the case of Mr. Bjayou this was certainly the case. 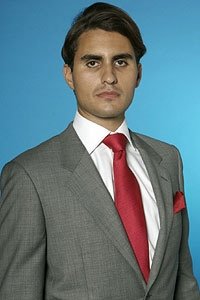 His shirt and tie combinations always made a statement and whilst on the side of flamboyant were never vulgar. His suits were well constructed around the shoulders and chest, and a pocket handkerchief was always tucked into the out breast welt. But what stole it for me was the dressing gown – whilst the others staggered around in the morning in boxers and a grubby T-shirt, Raef sweeped about in a floor length number complete with white piping and most probably a silk cravat – Noel Coward would have been proud. His only downfall was that after a hard day’s graft in the boardroom, he didn’t pop upstairs and slip into a velvet smoking jacket with silk lapels (get one), churches slippers and silk pyjamas.

Yes, Raef is certainly dapper but what impressed me most about him as the show has gone on is the fact that under that polished exterior lies a nice guy and a true gentleman. He came to the defence of Sara Dhada whilst she was being bullied by the rest of the pack, treated others with respect and was ultimately gracious in defeat. He’s the sort of chap who who would stand up when a women walks into the room, open doors for them, walk on the outside of the pavement and know how to hold his knife and fork properly.

The guys that remain irritate me beyond belief – Alex ‘the snake’ with his whining voice and Michael ‘the good Jewish boy’ who proudly states he is arrogant. These two need a smack round the head and a good shave. Dat’s what I’m tawkin abaat!

So why are gentleman fewer and far between? Because there are fewer ladies.

The Ladette culture is truly upon us and the girls in this programme make my skin crawl. I like strong women and do not subscribe to a bygone era when a woman’s place was in the home, however, these abominations take the biscuit. I fear that Claire, will win the day. Nicknamed “the rottweiler because of her ability to go after whatever she wants” I feel she is more akin to a vicious walrus. I have watched with horror those brown eyes sparkle as she’s twisted the knife in the boardroom and shuddered at the look of smug satisfaction on her face when some credit has come her way. She is undeniably bright, confident and can certainly stand up for herself but in my eyes is, like ALL the other female contestants, totally lacking in any charm whatsoever.

Mark Twain said, “Clothes make the man. Naked people have little or no influence in society.” I agree with this to some degree but also believe “you can’t polish a turd” and it’s what lies underneath that is just as important.

Raef certainly looked the part but was lacking in other areas. So six candidates left and six days to go until my next fix of Sir Alan and his band of reprobates.

Oh, and congratulations to Manchester United!…which won’t win me many friends!!